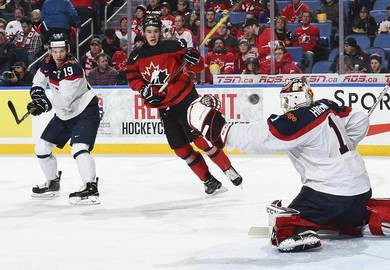 The North American side, seeking to improve upon a second place finish last time around, followed an opening 4-2 win over Finland with a 6-0 thrashing of Slovakia in Group A at the KeyBank Center.

Taylor Raddysh and Maxime Comtois also found the net for the winning side.

It continued a Canadian record of never losing to Slovakia in 20 years of men's under 20 competition.

"I thought that we got better as the game went on and I think we’ve gotten better every period," Gadjovich said afterwards.

"We’re doing well in building our game, and I thought I did well contributing in all areas of the ice.

"It’s special - you watch guys from the past who have scored, and it means a lot to help our country."

Switzerland won a tight game 3-2 against Belarus in Group B in the other encounter today held in the same venue.

The winning side were forced to come from behind after trailing early in the final period.

The top four sides in each group will progress with competition continuing tomorrow.