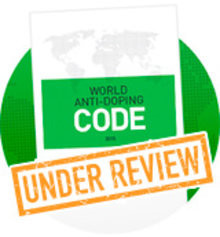 An initial feedback stage to begin a three-year process for devising the 2021 World Anti-Doping Code has been launched.

The World Anti-Doping Agency (WADA) is now seeking feedback on potential changes to the Code by March 31, 2018.

It begins a "two-year, three-phase" stakeholder consultation due to eventually culminate in several drafts of proposed Code amendments.

A final draft Code is then set to be presented for consideration and approval at the fifth World Conference on Doping in Sport, to be held in November 2019 in Katowice, Poland.

The new Code will then enter into effect on January 1, 2021.

It has been made clear from the outset that principles rejected from the first two versions of the Code after a failure to reach a consensus are unlikely to be revisited.

This includes the question of "whether the potential to enhance performance should be a mandatory criteria for placing a substance on the Prohibited List".

A seven-strong team of WADA officials and other experts has been compiled to oversee the review process.

Their goal is to "solicit stakeholder feedback; and, incorporate the best feedback into successive working drafts" of the 2021 Code, a statement explained.

An initial version of the World Anti-Doping Code was approved in Copenhagen in 2003.

Amendments were incorporated in new versions which came into force in 2009 and 2015.

A "Questions to Discuss and Consider" document has been published by WADA to highlight possible areas where changes may be made.

This includes questions of defining how organisations must be compliant with the Code as well as whether full verdicts must always be published afterwards.

Defining rules for meat contamination and whether low-level failures for steroid clenbuterol in Mexico and China will always be written off on this basis is another area mooted.

Topics not mentioned so far involve the possibility for awarding a suspension of longer than four-years for a first doping offence or for increase the Statute of Limitation beyond the existing period of 10 years.

Feedback can be given via the WADA Connect website here.

The "Questions to Discuss and Consider" document can be read here.