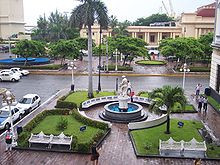 Veracruz will host Mexico's first-ever National Championships for Para-taekwondo athletes in January and February, it has been announced.

The Mexican Federation of Taekwondo (FMTKD) has confirmed the event will be held in the city in the New Year.

Organisers are expecting the country's top Para-taekwondo athletes to participate at the competition.

This includes Alejandro Gutiérrez Gudiño, winner of bronze medal in the junior poomsae category at the Pan American Championships in August.

Jessica Garcia and Claudia Romero, who both represented Mexico at the Para Taekwondo World Championships in London in October, are also set to take part.

It is hoped staging the country's first Para Taekwondo National Championships will increase the popularity and development of the sport in Mexico.

Gonzalez claimed taekwondo has steadily developed in recent years and holding the event will help build on that momentum.

Taekwondo is set to make its debut on the Paralympic Games programme at Tokyo 2020.