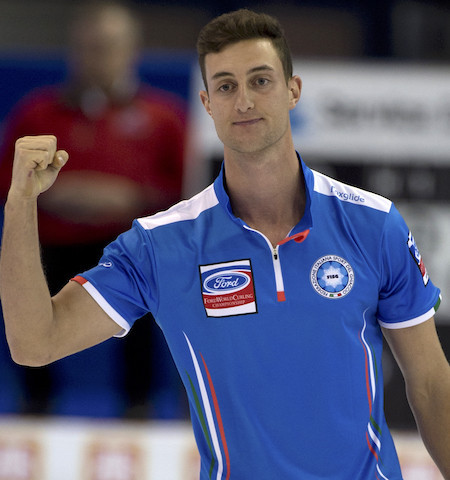 The Italian men's qualification came after a tense a 6-5 victory over Denmark in Pilsen in the Czech Republic.

The match was tight throughout and featured three blank ends.

Denmark missed a chance to take the match in the tenth end as, with Italy 5-4 up, their skip Rasmus Stjerne’s last stone feathered a guard on the way in, meaning he could not complete the double take-out for the two points required for the win.

With the score at 5-5, the tie had to be settled by an extra end.

Italy’s fourth player Amos Mosaner secured the win, and place at Pyeongchang 2018, for his side in the extra end when he played a double take-out across the house to make the score 6-5.

Denmark’s men still managed to book their place in Pyeongchang after beating hosts Czech Republic 4-2 in a sudden-death playoff in the evening.

As was the case in their match against Italy, the game was close all the way with no more than two points ever separating the two sides.

In the tenth end, Denmark skip Rasmus Stjerne atoned for his earlier error against Italy by drawing his final shot onto the button inside two Czech stones already in the house, earning one point and giving his side a 4-2 victory overall to become the last country to qualify for Pyeongchang.

"We were just short of the direct berth [a loss to Italy] but we’ve been playing well all week and to go down to the last game to get in is definitely something.

"We felt we did what we could to be prepared for this, but ultimately it was small margins that did it.

"I’m thrilled the boys put it on and I’m so happy right now."

Denmark women also managed to secure a place at Pyeongchang 2018 after beating Italy 5-4.

Just like the men's match between Italy and Denmark earlier in the day, this game needed an extra end to decide the winner following a 3-3 draw.

Italy had held a 2-1 lead going into a dramatic seventh end, in which skip Diana Gaspari thought she had extended that lead by two more points by drawing her last stone into the house.

Only one point was added to the score as one of Gaspari’s stones had to be removed because it had been touched by a sweeper.

Strangely, a remarkably similar incident happened in the following end as yet another Italian stone was discounted and a Danish stone replaced.

This allowed Denmark skip Madeleine Dupont to draw for two points and level the game at 3-3 to send it to an extra end.

The extra end was also a dramatic affair as Italian skip Gaspari came up short with her final draw following a double angle raise take-out by Dupont.

This handed Denmark a 5-4 win and a place in South Korea next February.

Denmark join hosts South Korea and China, who qualified for Pyeongchang 2018 at this tournament yesterday, and Canada, Britain, Japan, Russia, Sweden, Switzerland and the United States in the women's competition at the Games.

Their place at the Games as clean "Olympic Athletes from Russia" will be decided by the International Olympic Committee.