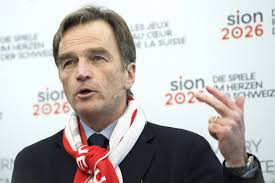 Jean-Philippe Rochat has resigned as President of Sion's bid to host the 2026 Winter Olympic and Paralympic Games after being linked to the Panama Papers.

He has been replaced by Jürg Stahl, President of Switzerland’s National Olympic Committee, known as Swiss Olympic.

Rochat had been under pressure since his name was linked to the Panama Papers, a a leak of documents from the archives of the offshore law firm Mossack Fonseca detailing the use of offshore tax havens by a number of high-profile figures.

"With the approval of the Federal Council and the now assured operational capability of Jürg Stahl, I have achieved what is necessary," Rochat said.

"The discussions about me weaken the project, which should become a success.

"The transition comes at the right time as a coherent continuation of this great project.

"The quality of the environmental and economic concept is high."

The 49-year-old Stahl has stood down from his full-time job with insurance firm Groupe Mutuel to concentrate on his new role with Sion 2026.

"It is key that in this phase of the public discussion… that we will be able to show a modern and sustainably designed Games will create added value in Switzerland and in all venues," he said.

"We will point out this benefit, which can benefit everyone.”

Sion 2026 has the backing of the Swiss Government but must still pass the test of a referendum.

A referendum on whether Sion should launch a Swiss bid for the 2026 Winter Olympic and Paralympic Games is set to take place on June 10 next year.

It is expected that a public ballot will be held in the canton of Valais and in the nearby commune of Kanderstag.

Valais is set to be the main hub of the Games and ski jumping would take place in Kanderstag.

A separate referendum is due to be held in Bern - where ice hockey would be held - by the end of next year.

Switzerland has not hosted the Winter Olympcs since St. Moritz in 1948.

Innsbruck in Austria became the latest city to suffer a referendum defeat in October, killing their bid for the 2026 event.