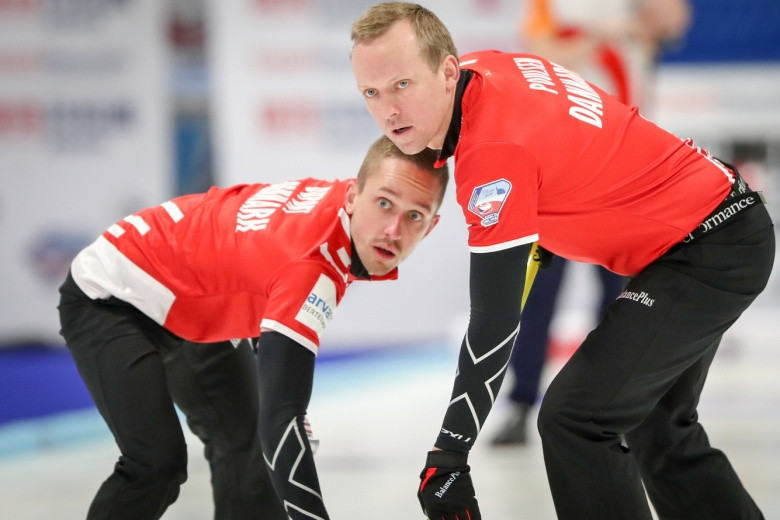 Denmark became the first men’s team to qualify for the play-offs at the World Curling Federation (WCF) Olympic Qualification Event 2017 in Pilsen in the Czech Republic following victory against The Netherlands.

This means Denmark will now play at least one more game to give themselves a chance to compete for one of the last two places in the men’s ten-team event at next year’s Winter Olympics in Pyeongchang.

After Denmark took a healthy lead early on at the Winter Arena Košutka, Netherland’s skip Jaap van Dorp managed to reduce the deficit to 4-3 in the fourth end following a draw for a point, putting their rivals under pressure.

Denmark skip Rasmus Stjerne made sure his side took the match, however, hitting one point to increase the lead to 5-3 before his side eventually ran out convincing 7-3 winners.

After the win and subsequent qualification to the next stage, Stjerne said: "We are relieved for sure [to be in the play-offs].

"It has been a hard event.

"Netherlands were good, we knew they wouldn’t give up.

"We were ahead all the way, but they were just behind us.

"We can relax a little bit now, because we have our chance to make the Olympics."

Russia also had a good day in Pilsen as they kept their play-off hopes alive with an important 6-5 victory over Germany.

They are now due to face China in vital clash tomorrow.

In the women’s event, it was China and Italy who stole the day as they became the first two teams to qualify for the top three spots.

This means that, like the Danish men’s team, they will now have the opportunity to play at least one more game, giving them a chance to take one of the last two remaining places in the women’s 10-team at Pyeongchang 2018.

China managed to come out on top against fellow table-toppers Denmark 9-3 thanks to skip Bingyu Wang’s raise split shot in the eighth end to score four points.

"Even though we lost last night we played the game our way and not that badly," said Wang.

"We just think in the round-robin anything can happen.

"Our goal is to qualify for the play-offs – for the top three, so we just focused on the next game and today we did that and won."

Italy beat hosts the Czech Republic, despite the hosts taking a 5-4 lead in the seventh end thanks to skip Anna Kubešková’s draw-shot for two points.

The Italians made a comeback in the 10th end with skip Diana Gaspari playing a double angle raise take-out to score three points and give her side a 9-7 win overall.

Gaspari expressed her surprise at her team’s performances throughout the competition.

"I’m still shaking after that last shot," she said.

"Luckily, I had two options so I was more relaxed.

"We’ve had two great weeks we didn’t expect to be such a tough team to play.

"I’m really surprised at how our team has reacted to this type of event."

Action is due to continue at the event tomorrow, when round-robin play is due to end with the top three teams in both the men's and women's tournaments progressing to a page play-off system.