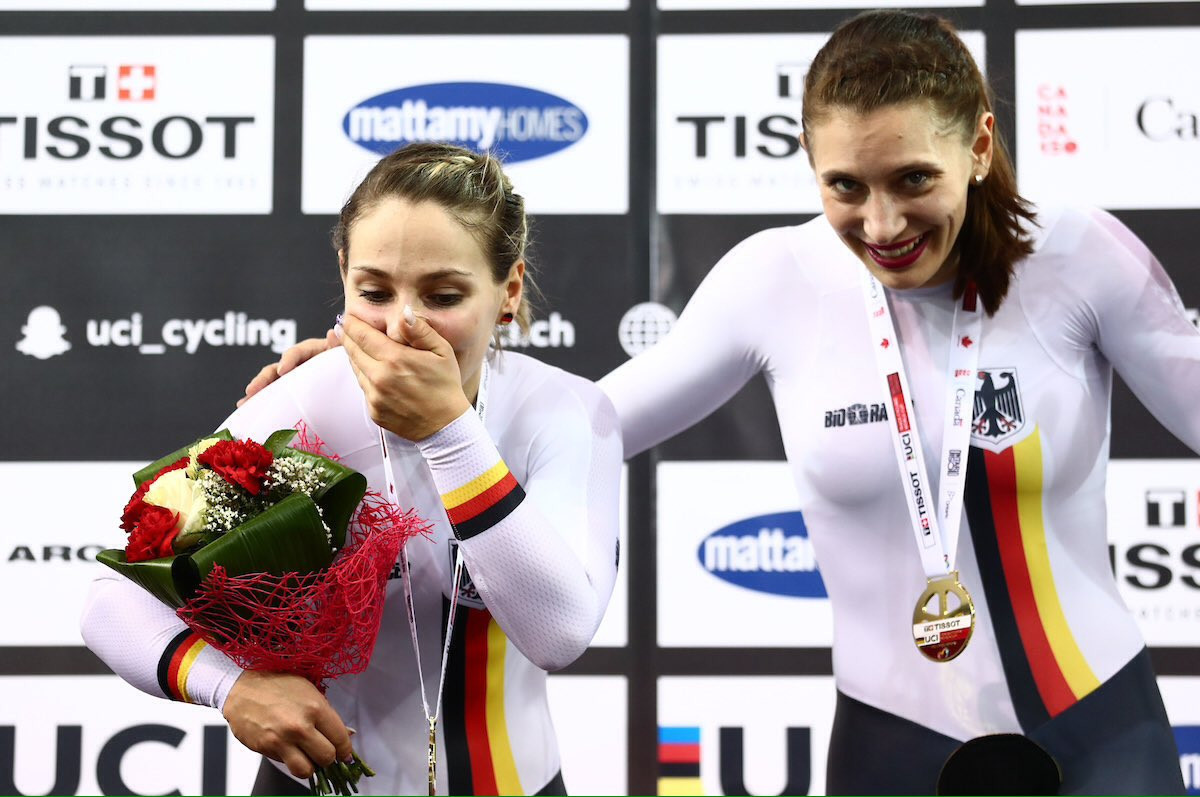 Kristina Vogel claimed two gold medals on the final day of the International Cycling Union (UCI) Track World Cup in Milton as the German continued her domination of the sprint events.

Vogel won the individual sprint competition yesterday to maintain her unbeaten record at the Mattamy National Cycling Centre and returned for the team event with Miriam Welte.

The German duo, Olympic champions in the discipline at London 2012, triumphed in the gold medal ride against The Netherlands.

They finished the event in a time of 32.759sec to secure the victory, with their Dutch rivals Hetty van de Wouw and Laurine van Riessen settling for the silver medal in 33.926.

South Korea’s Kim Wongyeong and Lee Hyejin achieved a time of 33.603 to win the bronze medal ride-off against Britain.

Vogel returned to the track for the women’s keirin competition, the final event of the World Cup, once again prevailing.

The world champion powered over the line ahead of Katie Marchant, the Briton celebrating her first individual World Cup medal by securing the silver.

Shanne Braspennincx of The Netherlands won the bronze medal.

Britain’s Katie Archibald continued her impressive record in the women’s madison, having won the Manchester leg with Elinor Barker.

Archibald repeated the feat with Eleanor Dickinson, the pair securing a winning total of 29 points throughout the event.

They finished five points clear of their nearest challengers Coralie Demay and Laurie Berthon of France, while New Zealand’s Racquel Sheath and Michaela Drummond were bronze medallists on 15 points.

What a fine ride by Denmark's Niklas Larsen!
He chose his moment and made it count. Points Race victory and the overall Omnium gold.

There was disappointment for the host nation in the men’s team pursuit competition after a crash saw the Canadian squad reduced to three riders against New Zealand.

Canada impressively finished just one second adrift, despite their disadvantage, and won the silver medal.

The bronze medal was earned by Switzerland after they beat the United States.

Hoogland secured the gold as the Dutchman emerged as the winner against his rival in both rides of the contest.

Britain’s Jack Carlin prevented Hugo Barrette from winning a bronze medal in front of a home crowd as he beat the Canadian sprinter in straight rides.

Denmark’s Niklas Larsen, winner of the men’s points race on the opening day of competition, added to his medal haul.

Having finished fifth and sixth in the scratch and tempo races, Larsen went on to win the elimination event to push himself towards the top of the standings.

An excellent performance in the points race, which saw the Danish rider gain a crucial lap, ultimately helped Larsen to take the victory on a total of 132.

Britain’s Ollie Wood claimed the silver medal on 120 points, with Switzerland’s Gael Suter rounding off the top three on 112.

The World Cup season is due continue next week, with Chile’s capital city Santiago staging the fourth event on December 9 and 10 at the Parque Peñalolén velodrome.

The campaign is then scheduled to draw to a close next year in Belarus’ capital Minsk, where action will be held from January 19 to 21.