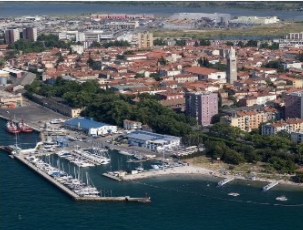 Koper in Slovenia has been revealed as the only candidate for the 2023 Summer European Youth Olympic Festival today as a contract was signed to formally approve Baku as host of the 2019 edition.

Koper, a coastal port city in the south-west of the country situated close to the Italian border, was officially confirmed as a candidate during the ongoing European Olympic Committees (EOC) General Assembly here.

The city was a co-host of the 2013 EuroBasket, where matches took place at the 5,000 seater Arena Bonifika.

No potential venues have yet been announced for the 2023 event.

If successful, it would become the second Slovenian host of the EYOF after Bled was the location for the winter version in 2003.

An official decision confirming the host is not expected until next year's EOC General Assembly, however, taking place in Marbella in Spain.

It comes amid a good week for Slovenia after Janez Kocijančič was elected permanent EOC President yesterday.

Baku, meanwhile, was officially rubber-stamped as 2019 Summer EYOF host today after being announced as the replacement location earlier this year.

Minsk in Belarus was the initial choice but withdrew to focus on preparations for the second European Games, also in 2019.

Azerbaijan Minister of Youth and Sports Azad Rahimov - the chief executive of the inaugural European Games in Baku in 2015 - was present to sign a contract with the EOC here today.

One other optional sport will be confirmed by March 2018.

More than 4,000 athletes will be expected to compete from across the continent.

Baku hosted the the Islamic Solidarity Games this year, two years after the European Games in the Azerbaijan capital.

The city was also a non-selected applicant for the 2020 Olympics and Paralympics, eventually awarded to Tokyo, while it will host matches at the 2020 European Football Championships.

Košice in Slovakia has already been announced as host of the 2021 Summer EYOF after Győr in Hungary played host to this year's edition.