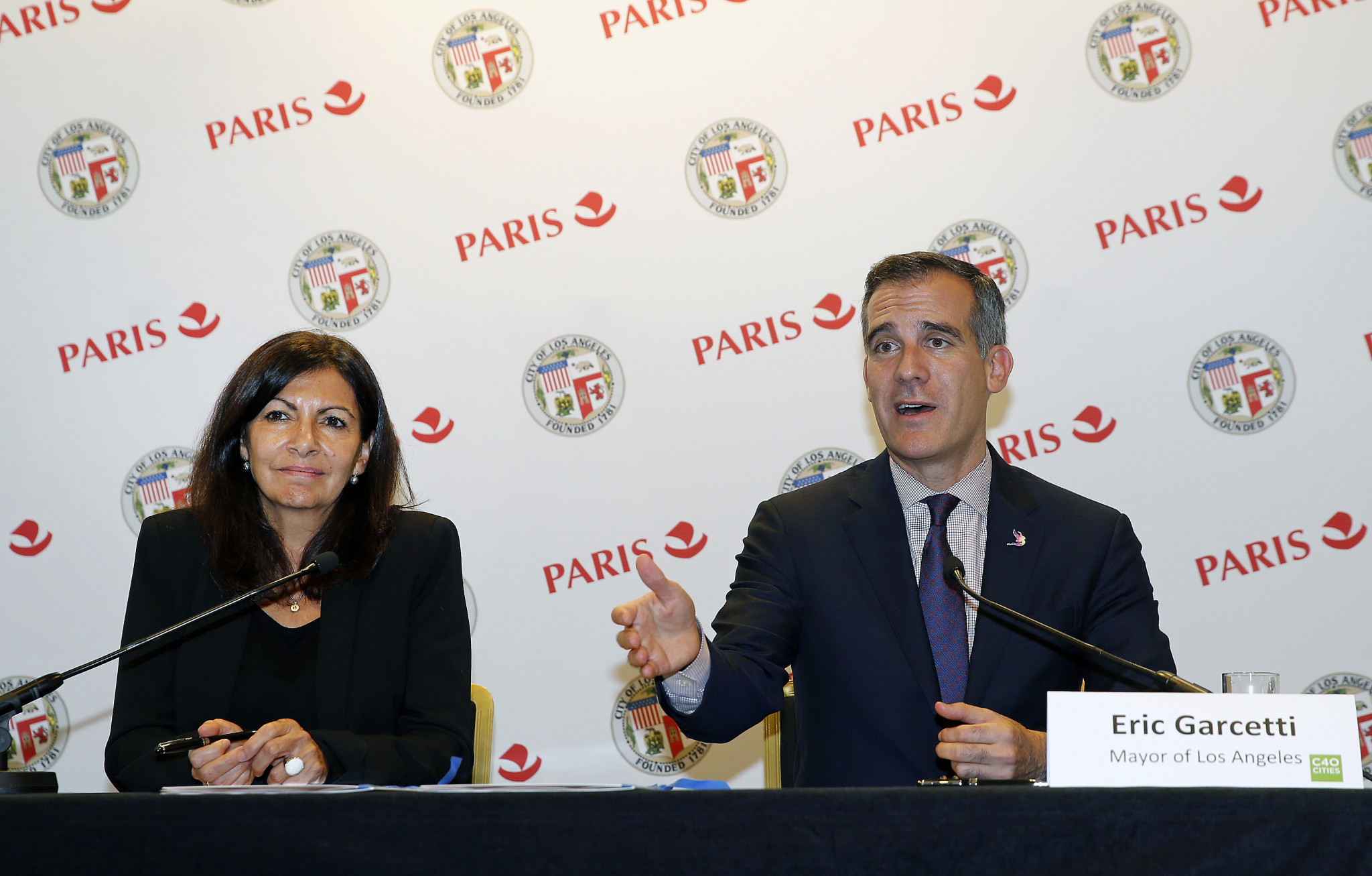 Eric Garcetti, the Mayor of Los Angeles, has underlined the Olympic city's determination to uphold its values on social integration and climate change even if they are in conflict with the policy of the US Government.

Speaking here at the signing - along with Anne Hidalgo, Mayor of Paris - of a Memorandum of Understanding committing the respective 2024 and 2028 Olympic hosts to co-operation over sustainability, inclusion and innovation, Garcetti insisted: "Our values are not up for negotiation."

When the US President, Donald Trump, announced in June that his country would withdraw from the Paris climate accord designed to combat global warming, California's Jerry Brown joined with fellow Governors in Washington and New York to announce a new alliance of states that would uphold the accord.

"Trump is AWOL but California is on the field, ready for battle," Brown said.

Garcetti is clearly ready to fight the good fight as he looks ahead to what he believes will be a landmark agreement between two cities who were initially competitors but are now working in a spirit of collaboration.

"Even in the United States where there are strong political disagreements the Olympic Games is actually something that unites us," he said.

"In the same way that if you go to the pavilion in Rio you have North and South Korean athletes sitting with each other.

"The Olympic Truce is something that's strong, something that feels real, and it does have the potential, even with your worst enemies, to bring you together.

"Our values are not up for negotiation.

"In Los Angeles and California you have what I think are the best embodiment of American values.

"And there's no blackmail, no conflict that will cause me to surrender those values.

"But I will always work with anybody if they are truly interested in progress, even if it's for that day and we have to fight the next six for that week.

"So we continue to show in Los Angeles and California that when you integrate immigrants you get a stronger economy, a stronger family and safer streets.

"When you actually work for the environment - and we thank the Trump administration for their help with the recent fires, for instance - they too can see with their very own eyes the loss of American lives in over a thousand homes.

"So there must be a truth there that I hope resonates with them more than just those days when they see communities burning.

"It's not just for Americans, these are divisions that exist in global cities everywhere.

"And it's up to Mayors, I think, to translate that at the local level - and there's nothing quite like the Olympics to do that."

The signing took place during the C40 Summit on Air Pollution Control here, attended by Mayors from around the world.

Hidalgo and Garcetti are chair and vice chair of C40.

Before Garcetti spoke, Hidalgo had emphasised the growing convergence of two cities that had begun as rivals for the 2024 Games but will now, thanks to the International Olympic Committee's unique double award in September, host consecutive summer Games, with the Olympics going to the Californian city in 2028.

"During the process of competing for the Olympic Games it became increasingly clear that we shared similar values," Hidalgo said.

The first section of the Memorandum speaks of Paris and LA creating "a new gold standard of sustainability for major international sporting events", offering "exemplary and innovative approaches to energy and water efficiency, greenhouse gas emissions reduction and climate resilience."

Article Two commits to a goal of "hosting inclusive Games", with the cities sharing expertise "in the area of expanding procurement for minorities, services and housing for refugees, migrants and the homeless".

A twinning committee, co-chaired by the two Mayors, will be set up to oversee the initiative.

"I think both of us have signed a lot of symbolic things in the past," Garcetti said.

"This is something that will accelerate human understanding and progress for both of us."