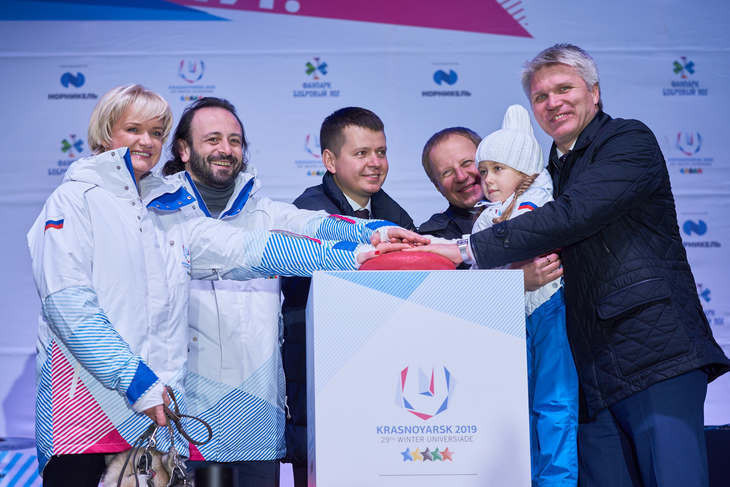 Russian Sports Minister Pavel Kolobkov has joined in celebrations to mark 500 days to go until the 2019 Winter Universiade in Krasnoyarsk.

This is the second module of educational classes led by the Executive Directorate of Krasnoyarsk 2019.

Students were able to learn about the sports included in the Universiade programme, as well as about famous athletes and Universiade Ambassadors.

A total of six schools were involved in the project.

"Today is 500 days before the opening of the Winter Universiade 2019," said Kolobkov.

"Holding of the Universiade in Krasnoyarsk underlines the great respect and confidence in us as the country where the largest international competitions are held.

"We look forward to the opening of the Winter Universiade 2019, and in the next 500 days we still have a lot to do.

"I am sure that the Universiade will be the most unforgettable event of 2019."

As well as the classes, a handmade gifts project was launched with people making souvenirs for athletes and guests attending the Winter Universiade.

Organisers hope to collect at least 8,000 gifts and souvenirs through the project.

The Winter Universiade 2019 countdown clock was unveiled at the Bobrovy Log Fun Park by Kolobkov and the director general of the Executive Directorate of Krasnoyarsk 2019, Maxim Urazov, among others.

To bring the festivities to a close, organisers arranged theatrical and musical performances as well as visits to photo zones and entertainment venues for residents during the evening.

Kolobkov also visited a number of venues and attended a meeting during his visit to the Siberian city to check on preparations for the event.

Those in attendance discussed the construction process and required repairs on venues as well as a number of issues related to the possibility of allocating additional Federal funding for the purchase of equipment for sports venues.

Another important topic of the meeting was the discussion of the maintenance of the new venues and potentially holding events in Krasnoyarsk at new and renovated facilities after the Universiade.

"We are celebrating 500 days before the Universiade, and I can say with certainty that the construction of future games venues is on schedule, everything is under control," Kolobkov added.

"There is no doubt that by the end of next year all sports venues will be completed and put into operation, and in a year we will hold the larger half of the test events."