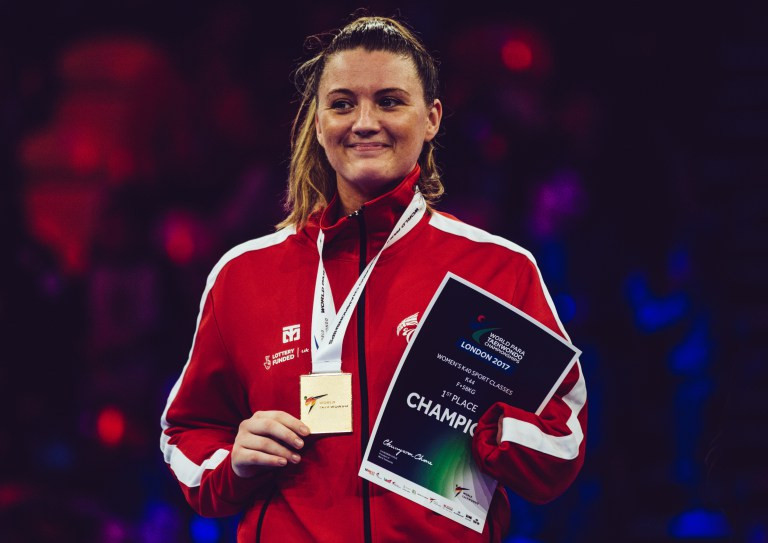 Great Britain’s Amy Truesdale was among the winners of the kyorugi events at the 2017 World Para-Taekwondo Championships held here today as Russia topped the medal standings.

Truesdale, the world number one, was dominant throughout the women's K44 over 58 kilograms competition and was leading 17-3 in the final when Moroccan opponent Rajae Akermach was forced to withdraw in round two due to injury.

Victory for the home favourite saw her add to her previous haul of a gold and two bronzes from her three previous World Championship appearances.

Truesdale lost in the 2014 final to Canada's Lisa Standeven and was only awarded gold after her opponent was retrospectively deemed ineligible for the event.

She therefore views her triumph today as marking her first world title success.

"I don’t know what happened to her [Akermach]," Truesdale, eight years after her first World Championship podium finish, said.

"She must have picked up an injury.

"It’s one of those things but a win’s a win.

"I class this as my first world title and hopefully not my last.

"It’s not really sunk in yet but obviously I’m delighted.

"The real goal is Tokyo 2020 and it will come around really quickly - so I’ve got to make sure I step up my training."

Despite a lengthy delay prior to her opening bout, Truesdale wasted little time in registering a 21-1 victory over Brazilian Debora Menezes.

Her second win was against Turkey's Seyma Nur Emeksiz, 23-4.

The strongest-performing nation in kyorugi, however, was Russia as they claimed six gold medals.

Five of them came in men’s competition with the other coming courtesy of Sakinat Magomedova in the women’s K41 under 49kg category at the expense of Serbia’s Dejana Backo.

Among the male winners was Vladislav Krichfalushiy, who beat Morocco’s Abdennour El Fedayni in the K41 under 61kg final.

Other Russian victors included Evegenii Alifirenko in the K42 under 61kg category and Aliskhab Ramazanov in the K44 over 75kg division.

The United States’ Evan Medell and Mexico’s Pedroza Francisco were the K44 over 75kg bronze medallists.

Also tasting victory for Russia were Spartak Gazzaev, who beat Poland’s Przemyslaw Wieczorek to the K41 over 75kg crown, and Valerii Bazin, the sole competitor in the K41 under 75kg category.

Russia’s closest challengers in the gold medal stakes were Turkey with four.

Three of those came in women’s competition with Nurgul Bilek and Seyma Nur Emeksiz the sole competitors in the respective K42 under 49kg and K43 over 58kg categories, and Ayse Dudu Karatay beating her only challenger, Jelena Terzic of Serbia, in the K42 over 58kg division.

The two other nations to win multiple kyorugi gold medals were Kazakhstan and Mongolia, with two each.

Dombayev, meanwhile, saw off the challenge Ukraine’s Anton Shvets in the final of a category that saw Morocco’s Rachid Ismaili Alaoui and Turkey’s Osman Yalt come away with the bronze medals.

Mongolia’s gold medals were won by Enkhtuya Khurelbaatar in the women’s K44 under 49kg category and Bolor-Erdene Ganbat in the men’s K44 under 61kg division.

Khurelbaatar beat Mexico’s Claudia Romero in her final, while Ganbat defeated Turkey’s Mahmut Bozteke in his.

Turkey’s Ali Can Ozcan and Russia’s Amir Rekalaev were the men’s K44 under 61kg bronze medallists.

The one other nation to win multiple poomsae gold medals was Britain thanks to victories for Bradley Brockies and Samantha Carrington in the respective P20 men’s junior and P30 women’s P33 events.

Brockies proved too strong for Serbia’s Tomislav Rankovic, while Carrington finished ahead of Russia’s Elizaveta Popova and America's Iris Fuentes.

An Opening Ceremony was held midway through today's action with World Taekwondo President Chungwon Choue and GB Taekwondo chair Julia Newton among those in attendance.