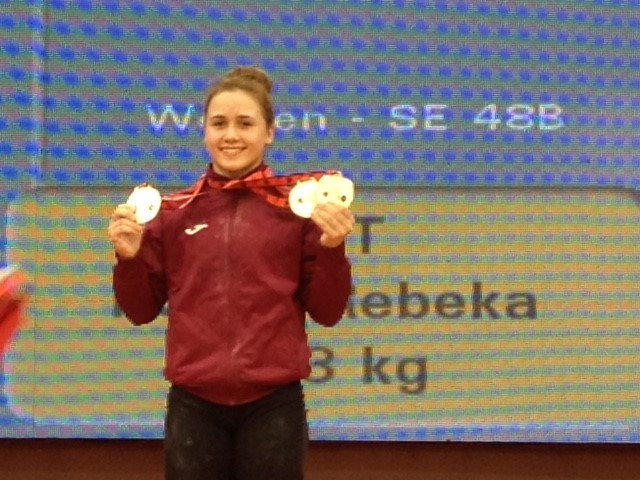 Rebekah Koha is on course for a World Championship medal after retaining her 58 kilograms European junior title in style.

Koha, 19, from Latvia, suffered a rare defeat in the senior European Championships in Croatia in April, when the 25-year-old Russian Natalya Khlestkina beat her on the last lift.

Koha responded two months later with a career-best performance to win gold in the International Weightlifting Federation (IWF) Junior World Championships in Tokyo, and today she was so far clear of her rivals here that she retired before her sixth attempt.

She goes to Anaheim, California next month ranked third of those who will be competing in the IWF World Championships.

Khlestkina will not be there as Russia is one of nine nations banned for multiple doping offences.

It has been quite a year for Latvian sportswomen.

Jelena Ostapenko surprised everybody in the tennis world by reaching the final of the French Open, the first unseeded woman to do so in more than 30 years.

If Koha can add a senior World Championship medal to her junior titles it will have been her best year in weightlifting.

She won her first European title as a youth in 2014, then took a bronze at the Youth Olympic Games, where she first met Ostapenko.

"I like tennis and would like to play for fun - if I can get a break from training," said Koha, from Ventspils.

Koha met Ostapenko again at the Rio 2016 Olympics, where she missed a medal by 2kg, and they occasionally cross paths at airports.

The two of them are certain to feature in Latvia's end-of-year sports awards.

Koha made 98kg in the snatch and 115kg in the clean and jerk, while her seven rivals collectively failed with more than half their attempts.

In the under-23 competition at the same weight, 58kg, the athletes were four years older but came up well short of Koha's total.

The finishing order was Madalina Molie of Romania on 203kg, Veronika Ivasiuk of Ukraine on 202kg and Izabella Yaylyan of Armenia on 195kg.

The day's two men's events, both at 69kg, were won by Italy and Turkey.

Mirko Zanni, a runner-up in last year's Junior Championships, won this time with a total of 302kg, in front of Ilya Zharnouski of Belarus and the very impressive Turkish 17-year-old Ozbet Furkan.

In the under-23 event, a tight contest went to Ahmet Okyay of Turkey on 311kg, ahead of Georgia's Goga Chkheidze on 308kg and Spain's David Sanchez a further kilogram behind.