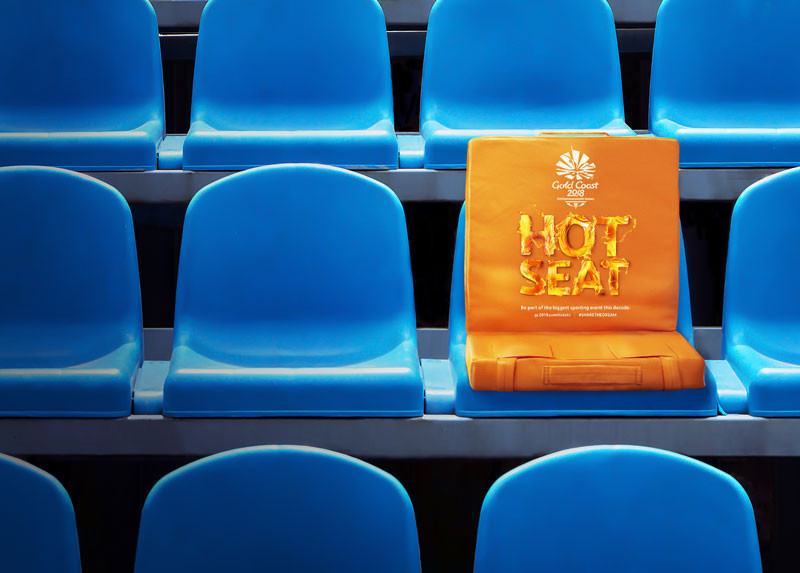 Gold Coast 2018 are hoping residents of Melbourne will buy tickets for next year's Commonwealth Games through the use of "hot seats".

A series of custom hot seats have been placed in stadiums in the city, featuring heated panels and Gold Coast 2018 branding.

It is hoped the seats will give the public the idea of what it would be like to watch the Games on the Gold Coast, with suggestions the coastal city enjoys better weather than Melbourne.

They have also been placed on trams across the city.

"The Commonwealth Games in 2018 will be a Games like never before as it's the first to be held in a regional city and one as beautiful as the Gold Coast," Lara McKay, Gold Coast 2018 general manager of communications and marketing, said.

"This execution takes one of the best aspects of the Gold Coast during winter - the amazing weather - to Melburnians to remind them to grab tickets for next April.

"These tactical executions are really important for us as we know there are different motivations for attending the Games in different markets but with a combination of elite sport, a beautiful destination and a vibrant arts and culture festival there is really is something for everyone."

The top prize was four tickets to the Gold Coast 2018 Opening Ceremony, due to take place on April 4.

Entrants were required to upload a photo of themselves keeping warm while watching sport with the hashtag #ShareTheDream.

There were 70 runner-up prizes, with winners receiving their own "hot seat" and two pairs of hand warmers.

The campaign continues Gold Coast 2018's efforts to promote and drive engagement before next year’s Games, scheduled to take place for 11 days and end on April 15.