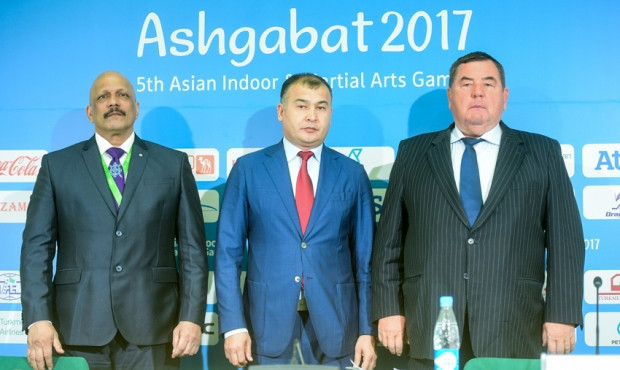 International Sambo Federation (FIAS) President Vasily Shestakov has said the world governing body is a "bit bemused" as to why it has not been granted recognition by the International Olympic Committee (IOC) and has hinted his belief that the ongoing controversy surrounding Russia could be jeopardising the sport's chances.

In December, sambo was one of 14 sports to miss out on provisional IOC recognition as the International Cheer Union and International Federation of Muaythai Amateur were both accepted.

It marked the latest snub for the FIAS, whose quintet of Honorary Presidents includes Russian President Vladimir Putin.

The organisation had been hopeful of being put forward for full recognition at the IOC Session in Rio de Janeiro last August, only to be overlooked along with several other Federations.

Russia is very much the dominant force in sambo, which originated in the Soviet Union in the 1920s when soldiers of the then-Soviet Army developed their own hand-to-hand combat technique.

The country is currently at the centre of a controversial doping scandal that has now been running for almost three years and has had a significant impact on national sports teams.

Asked whether he feels the scandal is hampering sambo’s chances of gaining IOC recognition, Shestakov told insidethegames that FIAS cannot know that for sure, but he added "there are some kind of thoughts and information that come, some guesses I'd say, that it might be somehow linked".

Shestakov was speaking on the sidelines of the 2017 Asian Indoor and Martial Games here in Turkmenistan’s capital, where three days of sambo competition begun yesterday.

He earlier claimed in a press conference that sambo should have already been recognised by the IOC.

"We fulfilled all the requirements from the IOC and we are in the close cooperation with different international sports organisations," Shestakov said.

"WADA [the World Anti-Doping Agency] considers us as one of the best International Federations fighting doping."

Shestakov pointed out that last year's World Championships in Bulgaria's capital Sofia were shown live in 15 countries and attracted 350,000 views on Facebook.

He believes this dispels the widely-held view that sambo is mostly followed by Russia and former Soviet Republics.

"According to the Facebook statistics, it is mostly people from the United States, Brazil, United Kingdom, France and Bulgaria who are watching our events, which means that sambo is really international these days and that's why we’re confused a little bit about the recognition," Shestakov said.

"Members of our different National Federations, coaches and athletes are all coming to me asking when will we be recognised?

"I understand today there are some problems between big sports organisations and Russia, but sambo is really an international sport now; it's not linked to Russia or whatever and it's important to know that.

"Moreover, today we have countries like the US, France, Venezuela and Japan who are now becoming really, really competitive on the level of play.

"Of course, the Russian team is still the strongest but the competition is getting more and more tense and the problem is that we have 120 Federations and Russia is just one of them.

"All the other 119 countries are really suffering and feel discriminated because they cannot be part of an Olympic sport."

Shestakov said FIAS is in "pretty good contact" with the IOC, holding regular meetings and "listening to them and their recommendations and their wishes".

IOC sports coordination manager Mike Joyce was among those in attendance at the 2017 European Sambo Championships, which were held in Belarus' capital Minsk in May.

"[Mike Joyce] was inspecting our event and told us that he was impressed by the level of organisation and that we're in line with the level of Olympic sports," Shestakov said.

Last October, Putin called for "every effort" to be made to have sambo recognised by the IOC.

He made the call while addressing a session of the Council for the Development of Physical Culture and Sport in the Vladimir region.

Putin added the inclusion of sambo would require a lengthy and labour-consuming period, but insisted "we need to be thinking about it and working on it".