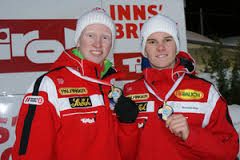 Knoll, 21, and Trojer, 20, were considered top prospects in the sport after winning the doubles gold medal at the 2016 International Luge Federation (FIL) Junior World Championships in Winterberg in Germany.

However, they did not qualify for this year's Senior World Championship which took place on their home track in Innsbruck.

According to a statement on the FIL website, the duo decided to call it a day without providing an explanation.

"Without giving any reasons the 2016 junior world champions now informed the office of the Austrian Luge Federation located at Innsbruck," the statement said.

Trojer and Knoll finished 24th in the overall FIL World Cup standings for 2016-2017.