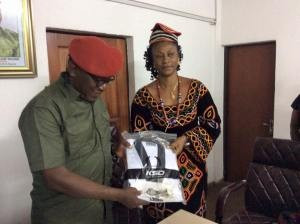 The new President of the Nigeria Taekwondo Federation (NTF), Margaret Binga, has promised that her focus will be on the athletes.

Speaking during the inauguration held in Nigerian capital Abuja, the former two-time African champion revealed that unearthing talents from the grassroots would also be another focus to ensure the country produced competitors to match world standards.

"We will focus on grassroots events and building a federation that is centred on athletes and we will govern in such a way that benefits the taekwondo practitioners and stakeholders," Binga said.

She represented Nigeria at the World Championships and 2004 Olympic qualifiers and, nationally, she was undefeated for 18 years between 1989 and 2007 and won 45 national gold medals during this period.

Binga is also a World Taekwondo international referee and an officer with the Nigeria Customs Service.

Nigeria’s Minister of Sports Solomon Dalung warned her that she must be transparent and include the rest of the NTF in the decision-making process.

"Make sure you hold regular meetings unless you will be inviting impeachment," he told her.

"I do not want sole administrators where only one person makes the decision.

"Hold at least four Board meetings in a year.

"The Federation must pass and ratify their constitution within three months otherwise you are inviting the Federal Ministry of Youths and Sports to take over your Federation.

"If this happens, do not say that we are interfering.

"There must be prudence and accountability when it comes to funds.

"Every fund that comes into the Federation must be accounted for."

Dalung tasked the NTF Board to focus on grassroots developmental initiatives and urged them to be responsible.

"The Federal Ministry of Youths and Sports must be informed before international trips in time," he said.

"If there is an incident outside, it is not the Federation that will be called to help, it is the Federal Government.

"It will also help us to hold Federations responsible for the athletes that run away and cause embarrassment to the country."

Binga's election victory in June was controversial because she was elected unopposed following the disqualification of incumbent George Ashiru by the Electoral Committee.

"Clearly, nothing much can be achieved without unity," said Dalung.

"I urge the Board to work together to take the sport forward."