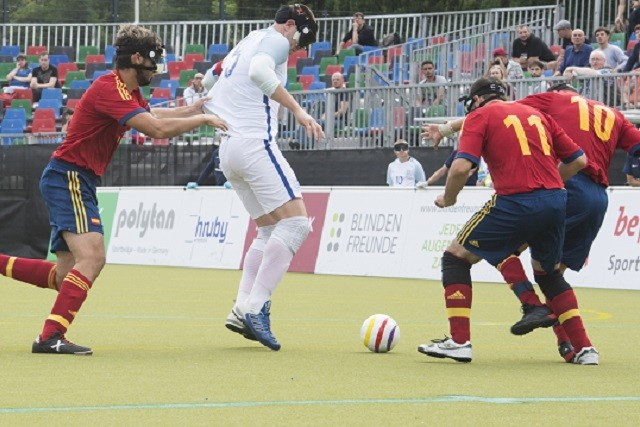 Spain will play Russia in the final of the International Blind Sports Federation European Football Championships in Berlin after both last four clashes were decided on penalties.

Both matches ended 2-2 at the Lilli-Henoch-Sportplatz in Germany's capital with Spain seeing off England and Russia beating France.

England had been in command of their semi-final as they surged into a 2-0 lead.

Roy Turnham put his country in front with just a minute on the clock before Keryn Seal doubled the advantage.

Only four minutes remained in the clash when Adolfo Acosta gave Spain hope with a low drive.

Dan English then scored an own goal which sent the game to spot kicks.

Russia to play the final against Spain on Saturday at 19.30 CEST#thesoundoffootball

English and Seal both missed their efforts as Spain won the shoot-out 2-1.

Alexey Loktionov gave Russia the lead against France but Martin Baron drew his side level.

Hakim Arezki then fired the French in front but a Russian equaliser from Denis Egorov necessitated penalties.

It was Russia who held their nerve best, winning the spot kick battle 4-3.

The final and third-place play-off will be played on Saturday (August 26) with further classification matches tomorrow.