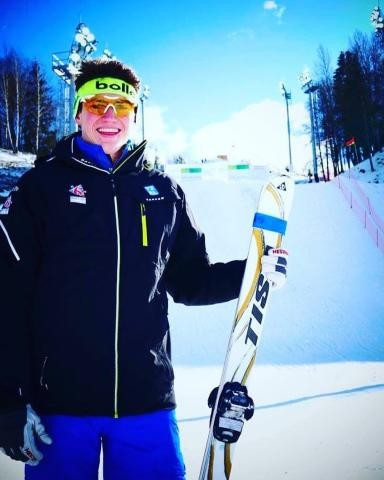 British aerial skier Lloyd Wallace is in a "light coma" after he suffered a severe head injury in a training crash in Switzerland.

Wallace, bronze medallist at the 2015 World Junior Championships, fell in the in-run for a big jump and crashed, according to the International Ski Federation.

The 22-year-old was then flown to the Uniklinik Zurich hospital following the incident, which occurred in Mettmenstetten.

In a statement, Swiss Ski said he was showing positive signs and that they could "breathe a sigh of relief".

A full prognosis is expected to be given by the middle of next week.

"The whole situation is hard on us as Lloyd Wallace was part of a combined training group with the Swiss Ski team," said Christoph Perreten, head of Freestyle Swiss Ski.

"Our thoughts are with Lloyd and his family."

Wallace, who has been using a crowdfunding page to help his ambition of competing for Britain at the Pyeongchang 2018 Winter Olympics in February, trains full-time with the Swiss aerial skiing team.

British Ski and Snowboard confirmed Wallace had been involved in a training accident and wished him a speedy recovery from his injuries.

"British Ski and Snowboard can confirm that British Aerials athlete Lloyd Wallace sustained a head injury yesterday whilst training in Switzerland," a statement from the governing body read.

"He is currently in hospital in Zurich and is being well looked after by local doctors, and his family."

Tributes to Wallace have poured in on social media.

Amy Williams, who won the women's skeleton gold medal at the 2010 Winter Olympic Games in Vancouver, said she was "praying for a speedy recovery" for Wallace.