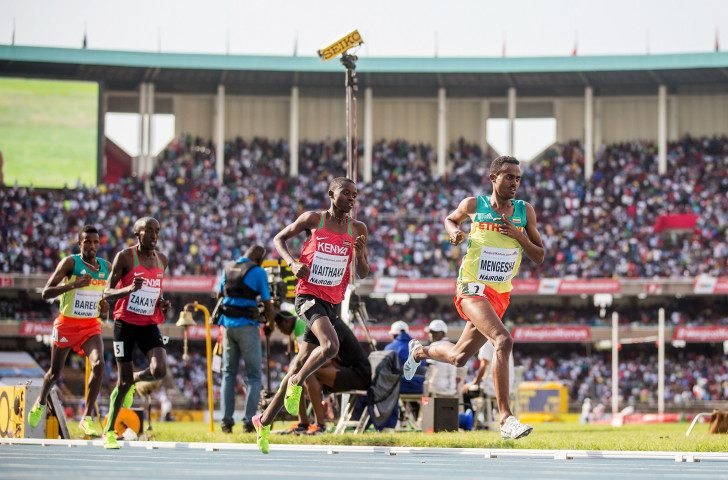 Kenya has plans to build three new stadiums as part of a bid for the 2023 International Association of Athletics Federations (IAAF) World Championships - according to the country's Sports Minister Hassan Wario.

An African nation has not staged the Championships since they began in 1983, but Wario announced at a welcome home event for athletes who have just competed at the IAAF World Championships in London that the country has proved it is ready to step up.

Last month, the Kenyan capital of Nairobi hosted a hugely successful edition of the IAAF World Under-18 Championships, which took place in a vibrant atmosphere, witnessed by capacity crowds.

Although Kenya’s athletes did not manage to match their feat of finishing top of the medals table at the 2015 World Championships in Beijing, they were second overall in London behind the United States and buoyed by victories in their traditional areas of dominance.

"We have shown that we are capable to host smaller events, and it has now reached a time when we should host big competitions," said Wario, who played a key role in the staging of last month’s Under-18 Championships.

"Kenya became the first African nation to win the World Championship in Beijing in 2015, it is only fitting that we should be the first country to bring the championships to Africa.

"We have a plan to build three big stadiums in Nairobi, Mombasa and Eldoret and seven additional new ones in other parts of the country."

Wario's words echo the recent call by Confederation of African Athletics (CAA) president Hamad Kalkaba Malboum for the continent to be awarded the World Championships by 2025.

Malboum said six African countries, including Kenya, are capable of hosting the event.

The Kenyan ambition is being nursed against a background of broken fences being mended in the national sporting structure.

Earlier this month, it was announced that a solution had been found to a dispute involving Kenya’s National Olympic Committee (NOCK) and several national sports federations, including the Kenya Taekwondo Association (KTA), who claimed they had been barred from taking part in the election of a new chairman.

The voting was due to take place at an Extraordinary General Assembly on May 5, but minutes before it started, the procedure was halted by a writ being served on behalf of the KTA.

It is hoped the election will still be able to take place early next month even though the KTA case has been adjourned until October.

Former marathon world record holder and International Olympic Committee member Paul Tergat will stand unopposed at the election to replace Kip Keino, the 77-year-old who won the 1,500m at the Mexico City 1968 Olympics and the 3,000m steeplechase in Munich four years later.

Kenya finished with 11 medals, of which five were gold, in the World Championships that concluded in London on Sunday (August 13) evening.

The Qatari capital of Doha is set to host the 2019 IAAF World Championships before Eugene, Oregon, stages the 2021 edition.