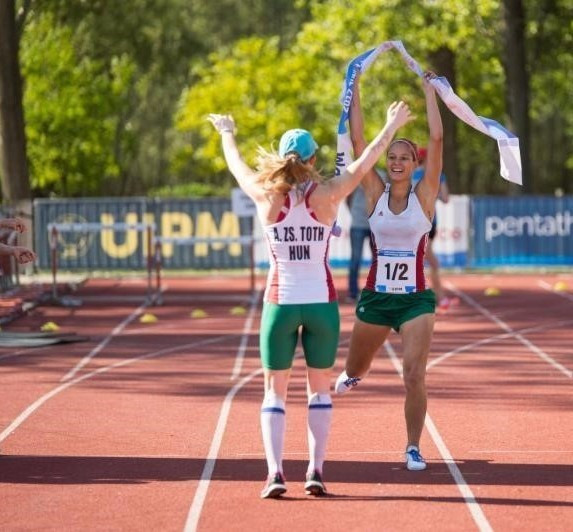 The host nation's team of Anna Zs Toth and Eszter Varga scored a total of 1,393 points to finish top of the leader board.

Italy's Aurora Tognetti and Elena Micheli finished second on 1,369 points and Guatemalan duo Isabel Brand and Sophia Hernandez rounded out the podium on 1,366.

Argentina's Ayelen Balsalobre and Juliana Borgarucci won the fencing stage as they overcame  Zs Toth and Varga in the bonus round after each posted 20 victories and 10 defeats.

Italy led the way in the swimming with their time of 2min 06.12sec to take maximum points, while the hosts touched the wall in 2:06.56.

Like the Czech Republic's Barbora Ciprova and Aranka Chalupnikova, Zs Toth and Varga enjoyed a perfect score of 300 points in the riding stage to enter the final phase with a sizeable advantage.

Zs Toth and Varga began the laser-run with an 18 second lead over their nearest rivals Italy with Russia's 2016 champions, Alena Popova and Sofia Serkina, were lurking only five seconds further behind.

The hosts retained the lead and crossed the line first to seal the gold medal.

In a tense battle for bronze, Brand and Hernandez overcame the defending champions with surprising ease to seal third place for Guatemala on the podium.

Action is due to continue tomorrow with the men's relay.

Qualifying for the women's and men's individual events takes is scheduled to take place on Thursday and Friday (August 10 and 11) respectively.

Solo finals are then pencilled in for Saturday (August 12) for the women's event and Sunday (August 13) for the men's.

The Championships will then conclude on August 14 with the mixed relay final.