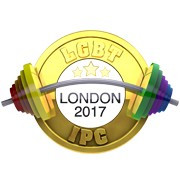 A lesbian, gay, bisexual, and transgender (LGBT) Powerlifting Union has been formed to give the sport’s athletes representation with the Federation of Gay Games (FGG) and mainstream federations.

The Union was created at the Congress meeting held during the inaugural LGBT International Powerlifting Championships (IPC) in London.

The meeting was attended by the most diverse group of LGBT powerlifters ever assembled, with some having attended Gay Games as early as 1982 and others being new to the sport and participating in their first championships.

The LGBT IPC was staged in response to the sport not being included on the programme for the 2018 Gay Games in Paris.

Following discussions with the FGG, a recommendation was made for LGBT powerlifters to have their own annual Championships for three years of the quadrennial cycle.

Powerlifting is not featuring on the Paris 2018 programme due to the fact that it previously had no representation within the FGG.

Another stumbling block is that a number of mainstream powerlifting federations have rules that could prevent LGBT lifters attending Gay Games in the future.

But the newly-formed Union aims to clarify these rules and open discussions where appropriate to increase participation in future Gay Games.

Athletes participating in the event ranged from complete novices to world champions and world record holders.

The main purpose of the Championships is to grow and develop LGBT powerlifting in preparation for the 2022 Gay Games, an event for which Mexican city Guadalajara, Hong Kong and the US capital Washington D.C. are all bidding.

The winning 2022 bid is due to be announced at the FGG's Annual General Meeting in Paris in October.

"LGBT IPC 2017 was a great success bringing together LGBT powerlifters from all over the world, along with their coaches, partners, families and friends," said Chris Morgan, the male Co-President of the LGBT Powerlifting Union, a Gay Games Ambassador and an eight-time world champion in the sport.

"The weekend provided an opportunity for us to begin organising our affairs in preparation for re-entering the Gay Games in 2022.

Charlotte Wareing, the female Co-President of the LGBT Powerlifting Union and a two-time world champion and four-time European champion, added: "It is essential that we adopt a sports model that attracts as many lifters as possible to participate in LGBT lifting, including people who in the past may have been discriminated against due to their gender, sexuality or HIV status.

"Gay Games adopts the principles in inclusion, participation and pursuit of personal best and we aim to stay true to these principles through the new LGBT Powerlifting Union."

Next year’s LGBT IPC is also scheduled to take place in London, on July 28.

It falls on the weekend before the Opening Ceremony of the 2018 Gay Games on August 4.

Throughout the remainder of 2017 and early 2018, the LGBT Powerlifting Union will be aiming to boost participation in the LGBT IPC by continuing to connect with the LGBT sports community and by reaching out to under-represented athletes such as women, transgender, non binary and intersexed.