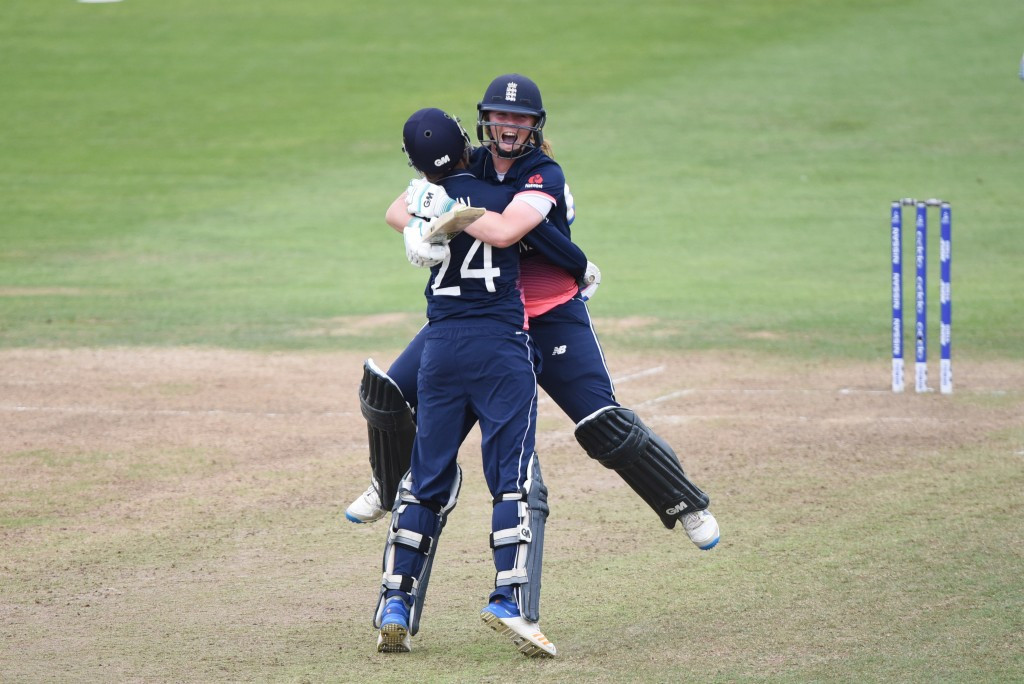 Fielding first, England managed to restrict their opponents to 218-6 in 50 overs at the County Ground in Bristol, a total which looked very reachable for the three-time champions.

However, a middle order collapse as nerves started to kick in set up a thrilling finish to proceedings as both sides sensed they had a chance to reach Sunday’s final at Lord’s in London.

But Shrubsole was able to stay composed among high-charged scenes in the middle as she spanked a delivery from Shabnim Ismail to the boundary to send her country over the line with two balls to spare.

South Africa had won the toss and elected to bat, but saw Lizelle Lee and Trisha Chetty depart with just seven and 15 runs to their name respectively before their side could bring up 50 runs.

England’s bowlers were on top and make the batters work hard, although opener Laura Wolvaardt and number four Mignon du Preez put on 77 for the third wicket as they tried to edge their way to a decent score.

Wolvaardt departed for 66 after being bowled by home captain Heather Knight, but du Preez managed to survive the innings to finish on 76 not out as the South Africans grafted their way to 218-6.

The reply from England started well enough as Tammy Beaumont and Lauren Winfield put together an opening partnership of 42 before the latter was caught be du Preez off Ayabonga Khaka for 20.

Khaka had soon bowled the other opener for 15 to put England on 62-2 after 13 overs.

It did not appear to disturb the flow of the hosts at this point as Knight and Sarah Taylor kept the scoreboard ticking, adding 68 for the third wicket.

However, the dismissal of Taylor for 54 and Knight for 30 in the space of eight balls saw the nerves start to jangle for England, with Natalie Sciver also finding heading back to the pavilion just four deliveries after her skipper.

Fran Wilson and Katherine Brunt steadied the ship briefly before the latter was bowled by Moseline Daniels for 12.

This brought Jenny Gunn to the wicket, starting a partnership which appeared to be steering England home as they got the total to 213-6, leaving just six runs required to win off 13 balls.

But proceedings took another turn when Wilson was caught by Chetty off Marizanne Kapp for 30 from the last ball of the 48th over before Laura Marsh followed nine deliveries later.

By now, England needed just two runs to win, but the tension was high as the South Africans knew they had a sniff of victory again.

They would be left despairing though as Shrubsole showed no nerves to punch a cover drive through the fielders to seal an incredible win.

At the other end, Gunn finished on 27 not out.

England will meet either defending champions Australia or India in the final.

The two sides will meet in the second semi-final on Thursday (July 20) at the County Ground in Derby.