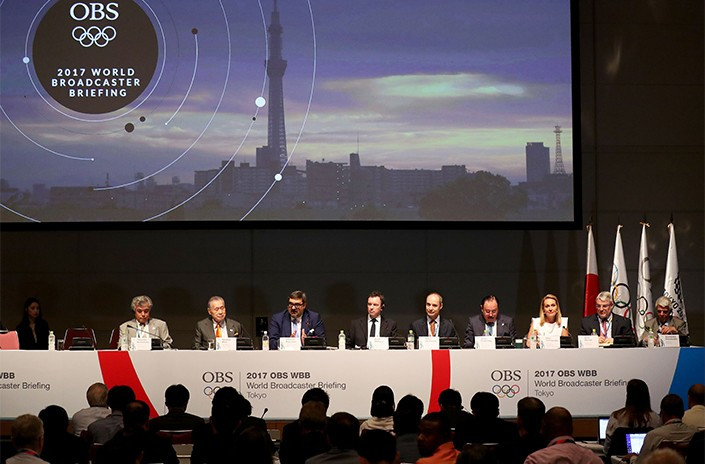 Olympic Broadcasting Services (OBS) have continued their planning for Tokyo 2020 by welcoming the Games' Rights Holding Broadcasters (RHBs) to the Japanese capital for a three-day briefing.

RHBs were invited for the first time to visit the existing venues and construction sites and to learn more about the broadcast and operational plans which are being developed for Tokyo 2020.

Held in close cooperation with the Tokyo 2020 Organising Committee, the 2017 OBS World Broadcaster Briefing (WBB) is considered an important milestone in the preparation for the broadcast of the Games.

They then visited the iconic Nippon Budokan indoor arena in Kitanomaru Park before travelling to the Tokyo Metropolitan Gymnasium in Sendagaya.

The RHBs also drove by the Yoyogi National Stadium, located in the Shibuya district, before returning to the Tokyo Bay Zone to check out the construction sites of the Olympic and Paralympic Athletes’ Village.

Their final stop of the venue tour was the International Broadcast Centre, located at the Tokyo Big Sight.

The building, which will also serve as the Main Press Centre, staged the main session of the WBB on day two of the briefing.

During the session, the OBS provided an overview of the production, technical and operational plans for Tokyo 2020.

They also updated RHBs on the progress made in key areas such as sports, venues, transport, accommodation and accreditation.

"The 1964 Olympics left a strong legacy that can still be seen today, and we truly believe the 2020 Olympic Games will have a similar power of transformation and will again lay the groundwork for innovation, even more evident in respect to broadcasting."

"On the 24th of this month, it will be three years to go until the Opening Ceremony of the Olympic Games Tokyo 2020," Tokyo 2020 President and former Prime Minister Yoshirō Mori said.

"The Tokyo Big Sight, where we are at the moment, will serve as the International Broadcast Centre.

"In three years, you will be telling your Tokyo 2020 Games stories to the world from this location.

"We expect new technologies to be introduced at the Tokyo 2020 Games.

"For example, the large 4K and 8K screens will be able to fully convey the athletes’ amazing performances.

"On the other hand, more and more people will probably be watching the Games on much smaller screens, like those on smart phones.

"Also, I believe it is essential that all people, regardless of their abilities, either with impairments or not, will get the most out of the performances of world’s top athletes."

The WBB concluded with a series of individual unilateral meetings with each RHB, allowing them to discuss further their specific broadcast requirements and production needs with the OBS team.

It is claimed Tokyo 2020 will represent the largest Olympic broadcast operation to date, with a record 339 events to be shown all around the world through linear and digital platforms."