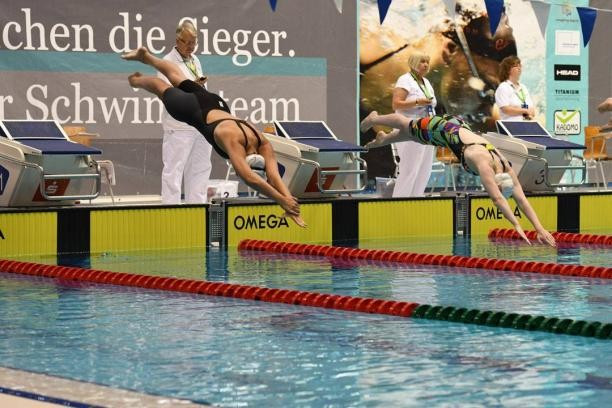 The Italian won the women's 100 metres freestyle with 1,012 points, following on from her win in the 200m freestyle yesterday at the Schwimm und Sprunghalle im Europa Sportpark pool in the German capital.

The 19-year-old then completed a successful night by taking the 150m individual medley gold, setting a world record of 2 min 46.73sec in the SM4 class.

“I am really happy with my times, I achieved personal bests," she said.

"I am also satisfied with myself because I could break the world record."

British swimmer Thomas Hamer matched Boggioni in the men’s race, adding 100m freestyle gold to the 200m freestyle he won on the first day with 970.

The races are decided by points according to the swimmers’ classes and the time they clock.

Poland's Oliwia Jablonska shone in the womens 800m freestyle, taking the win with 895 and setting a new world record of 9:18.36 for the S10 class.

Four world records were set in the men's equivalent.

Three-time Paralympic gold medallist Oliver Hynd of Great Britain broke the S8 six-year-old world record with a time of 9:12.26 and won the race thanks to his 924.

The Japanese team of Mei Ichinose, An Nishida, Sakura Koike and Airi Ike won the women's 4x100m freestyle with 508, while the United States' Robert Griswold, David Harry Gelfand, Joseph Peppersack and Matthew Torres claimed victory in the men's equivalent with 600.

Spain's Nuria Marques Soto showed outstanding form as she stormed to gold in the women's 50m backstroke with a world record time of 32.76 and 929 in the S9 class.

Action is due to continue tomorrow and will conclude on Sunday (July 9).