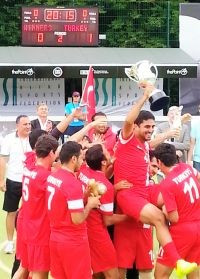 The fixture list for this year's International Blind Sports Federation (IBSA) Football European Championships in Berlin has been announced.

Ten countries will first compete in two five-team groups at the Lilli-Henoch-Sportplatz in the German capital, between August 18 and 26.

Hosts Germany will begin the event with a Group A clash against Italy in the sole game on day one.

England will begin their campaign in the same group the following day by facing Romania.

France, the fifth team in the group, will play Germany to begin their tournament on August 20.

Group B will begin with Spain facing Georgia and Turkey meeting Belgium on August 19.

Russia will play Turkey to begin their Group B account the following day.

The top two countries from each group will progress to the semi-finals on August 24, before the final on August 26.

Turkey are the defending champions in Berlin after beating Russia in the 2015 final in Hereford in England.

Belgium, France, Germany, England, Italy, Russia, Spain and Turkey all qualified automatically after finishing in the top eight at the last edition.

Romania and Georgia came through a qualification tournament in April.

Blind football - which features five-a-side teams - provided a big moment for host nation Brazil at the Rio 2016 Paralympics in September.

Action in Berlin will be organised by the German Sports Federation for Persons with Disabilities and the Berlin Disability Sports Association.

A purpose-built blind football arena will be built at the arena for the event.

The full schedule can be found here.