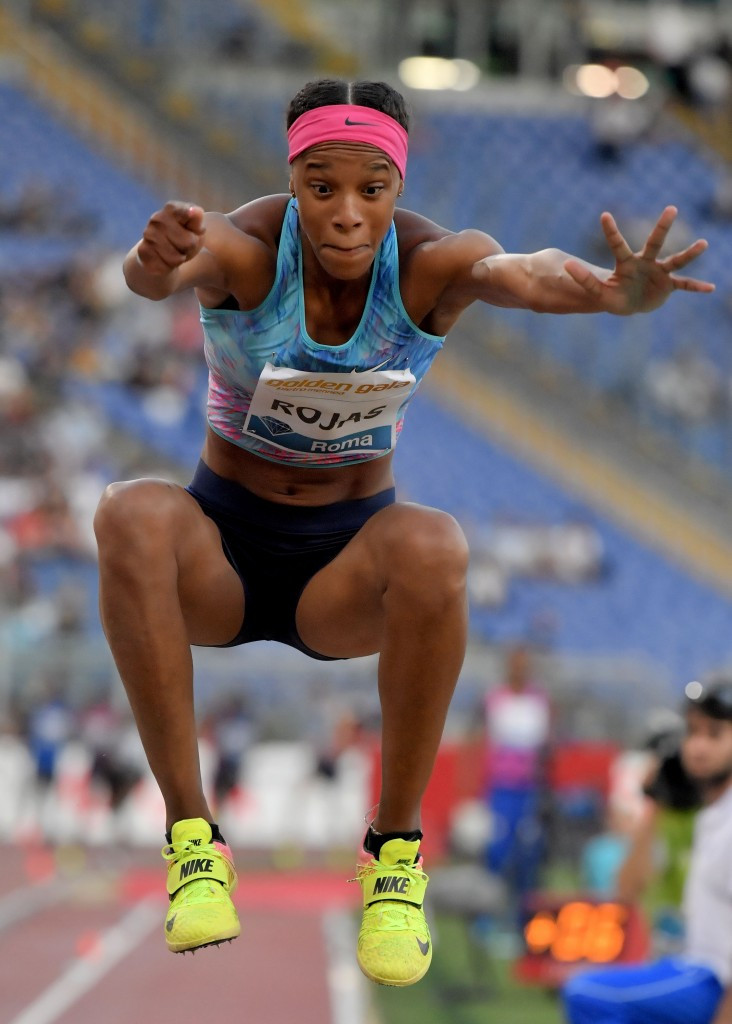 Rome's Olympic Stadium witnessed what might be a changing of the guard in the women’s triple jump as Colombia’s 33-year-old world and Olympic champion Caterine Ibarguen had her unbeaten run of over a year ended.

Rojas, who served notice of her prodigious talent by winning the world indoor title last year, never lost the lead after her second round effort of 14.76 metres, improving it to 14.82 and then 14.84 before Ibarguen - who was beaten only once between taking silver at the London 2012 Games and gold in Rio - produced a final effort of 14.78, a season's best.

Third place went to the Kazakh jumper who beat Ibarguen to the London 2012 title, Olga Rypakova, with a season's best of 14.64.

Ibarguen was in philosophical mood afterwards.

"I am quite satisfied by the result," she said.

"The shape is not so brilliant yet but I'm working to improve day by day.

"It's not easy to be on the top for many years, younger competitors like Rojas are very strong."

"I trained a lot during winter and now I'm finding important marks with continuity," she said.

"I hope to be able to improve in the next meetings but for this period of the season the shape and the feelings are very good."

The same can be said for Thomas Rohler, Germany's Olympic javelin champion, who - despite being unable to better his stupendous season-opener of 93.90m - registered another 90m throw with his sixth and final attempt to snatch a dramatic victory from his compatriot Johannes Vetter.

Rohler, whose effort at the opening IAAF Diamond League in Doha last month was the furthest throw in 20 years and put him second in the all-time rankings behind the great Jan Zelezny, looked like he might have to settle for second place in the Olympic Stadium after his early lead - 87.05 in the second round, 87.89 in the third - was overhauled by Vetter, fourth at the Rio Games, who managed 88.15 with his fifth attempt.

But the 25-year-old from Jena responded immediately to claim maximum points, ramping up the atmosphere in the 37th edition of the Golden Gala Pietro Mennea, with his predecessor as Olympic champion, Keshorn Walcott of Trinidad and Tobago, taking third place with 86.61.

"I made it again," said Rohler.

"It was hard today, I was stable at 87m and the progression, our competition was similar to the Doha competition between Johannes Vetter and me.

"I am super happy.

"Whether I was nervous before my sixth attempt, well you have to deal with this - it is easier when someone pushes you."

Russia's world high jump champion Mariya Lasitskene, competing under a neutral banner, was clear favourite after her 2017 world-leading personal best of 2.03m, and she lived up to the position with a best of 2.00.

Another Olympic champion who managed to retain pre-eminence on the night was Greece's pole vaulter Ekaterini Stefanidi, whose best of 4.85m, just a centimetre below her personal best, was enough to hold off the challenge of Cuba's world champion Yarisley Silva, second ahead of New Zealand's Eliza McCartney after both had cleared 4.75.

Stefanidi, who claimed on the eve of competition that she was in ideal shape, won with three first-time clearances before having three efforts at a world record height of 5.07.

It was a disappointing night for US vaulter Sandi Morris, who finished last season by becoming only the second woman after Yelena Isinbayeva to manage a 5.00m jump but had to settle for sixth place with 4.55.

The women's 5,000m was set up as a second successive attempt by Ethiopia's world 1,500m record holder Genzebe Dibaba to better the nine-year-old world record of 14min 11.15sec set by her elder sister Tirunesh, but once again - as in Eugene - the younger sister fell short as she finished sixth in 14:41.55.

The race was won by Kenya's Olympic silver medallist Hellen Obiri in a Kenyan record of 14:18.37 – the fastest run so far this year.

Obiri, the Olympic 5,000m silver medallist, finished almost 15 seconds clear of her nearest rivals - fellow Kenyan Agnes Tirop, who set a personal best of 14:33.09, and Ethiopia’s Letesenbet Giday, who beat Turkey’s European champion Yasemin Can to third place, 14:33.32 to 14:36.82, with both being personal bests.

There is no stopping Conseslus Kipruto as Kenya’s Olympic 3,000m steeplechase champion, unbeaten in last year’s Diamond League, earned another win in 8:04.63, the fastest run so far this season.

Sifan Hassan of The Netherlands showed she is in top early season form as she won the women’s 1,500m in a meeting record of 3:56.22.

Russia’s world champion Sergey Shubenkov - competing, like his compatriot Lasitskene under a neutral banner - was third in 13.21.

Dafne Schippers, the world 200m champion from The Netherlands, won the women’s 100m in 10.99sec ahead of Marie-Josee Ta Lou of the Ivory Coast, who clocked 11.03.