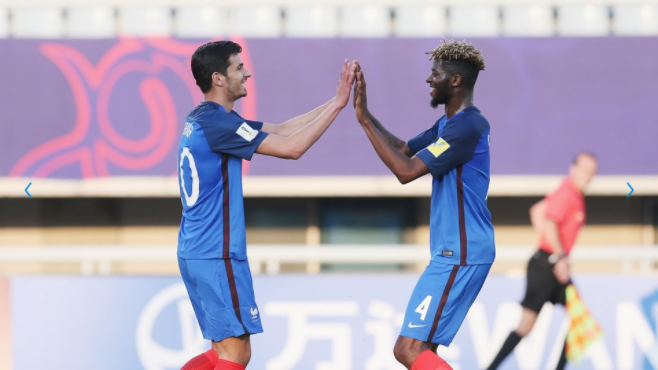 European champions France showed why they are considered among the favourites to win the FIFA Under-20 World Cup in South Korea after opening their campaign with an impressive 3-0 victory over Honduras in Group E.

Jean-Kevin Augustin fired home a 15th-minute free-kick from 20 yards to put the French on the path to victory at the Cheonan Sports Complex and they never looked back from there.

Today's other match in Group E saw Vietnam mark their debut at an 11-a-side FIFA tournament by picking up a 0-0 draw with New Zealand.

The newcomers had the better of the chances with New Zealand goalkeeper Michael Woud being called into action twice in the space of a minute in the first-half.

As the clock ticked down on the match, there was still a chance for Vietnam to snatch a historic win but Hoang Duc Nguyen blazed over as he arrived at the far post.

There was also action in Group F today as 2015 semi-finalists Senegal started their quest for glory with a 2-0 victory over Saudi Arabia at the Incheon Stadium.

Ibrahima Niane and Cavin Diagne produced superb volleyed efforts in the 13th and 15th minutes respectively to give Senegal an early two-goal cushion.

The West African nation could have extended their lead further had it not been for some excellent saves from Saudi Arabia goalkeeper Mohammed Alyami.

Despite it being limited to two goals, the result still represented Senegal's biggest margin of victory in the history of the tournament.

It also sees them claim an early lead in the group following Ecuador's thrilling 3-3 draw with the United States earlier in the day.

Herlin Lino and Bryan Cabezas got Ecuador off to a flying start with two quickfire goals inside the opening seven minutes.

The US fought back though with 17-year-old Joshua Sargent scoring in the 36th minute with a confident finish to halve the deficit.

Sargent then levelled the contest with a header in the 54th minute after Brooks Lennon had picked him out with a sensational cross from the right wing.

It looked as though the US' good work would count for nothing in the 64th minute when a misplayed pass by goalkeeper Jonathan Klinsmann led to Cabezas' second goal of the match.

Midfielder Luca de la Torre had other ideas, however, and pounced on a poor clearance in stoppage time before drilling a right-footed shot into the bottom right corner of the net.

Action in South Korea is scheduled to continue tomorrow with the second round of matches in Groups A and B.

Group A sees England face Guinea and hosts South Korea go up against Argentina at the Jeonju World Cup Stadium.

Venezuela's clash with Vanuatu and Mexico's meeting with Germany make up the Group B line-up at the Daejeon World Cup Stadium.