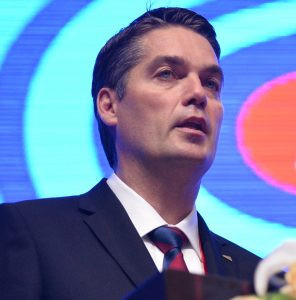 The Badminton World Federation (BWF) membership is set to elect a new Council tomorrow to guide the world governing body through the next Olympic cycle until Tokyo 2020.

The vote, which happens every quadrennial, will take place at the BWF Annual General Meeting in Australian city Gold Coast, where 32 individuals from across all five continental confederations are vying for 18 places on the 27-member Council.

The other seats on Council are taken by BWF President Poul-Erik Høyer, BWF Deputy President Gustavo Salazar Delgado, BWF vice-president for Para-badminton, Paul Kurzo - all of whom have been nominated unopposed - plus five continental vice-presidents, and the chair of the BWF Athletes’ Commission.

A new face will also be representing players on the BWF Council as outgoing chair of the BWF Athletes' Commission, Belgium’s Yuhan Tan, is set to step down next week, when three positions on the six-member panel will be up for grabs.

Voting is due to take place at the 2017 BWF Sudirman Cup in Gold Coast on Wednesday (May 24) with three women and six men vying for the vacant seats.

World number 20 Marc Zwiebler of Germany, who won European gold at the 2012 Championships in Karlskrona in Sweden, is also in the running alongside Akvile Stapusaityte of Lithuania, Uganda's Edwin Ekiring and Luis Ramon Garrido Esquivel of Mexico.

Proceedings at the BWF’s annual weekend of deliberations and festivities started today with the seventh edition of the BWF Members Forum.

The Forum provided a review of badminton’s Rio 2016 Olympic Games competition as well as an update on the BWF Integrity Campaign.

BWF Secretary General Thomas Lund told delegates from 145 of its 188 member associations that despite various challenges in showcasing badminton in Brazil, a country in which it was hardly known and in a significantly different time zone to Asia, the sport was "safely above average" in key Rio 2016 performance indicators.

"We took strategic choices which were the right choices for the world of badminton," he said in reference to the decision to stage many finals during the morning to accommodate evening viewing in Asian markets.

Sharing data from a report which showed 64.9 per cent of available tickets were sold, he noted "television is still the key media for such events like the Olympics" and Asia remains vital for badminton, hence the decisions taken.

Lund also said badminton was growing in the digital-media space "but could do better".

BWF chief operating officer Stuart Borrie, meanwhile, told the BWF membership that everyone has a part to play in the fight against corruption to keep badminton a clean sport.

Highlighting a number of steps by BWF in the past year to boost its "i am badminton" Integrity Campaign, he said it is crucial that members focus on education and awareness to help their athletes from acting naively or being led astray into corrupt practices.

"Start with awareness such as the changes to the BWF regulations," he said, alluding to the recently-enhanced Code of Conduct in relation to Betting, Wagering and Irregular Match Results.

Borrie also spoke about the role of star players as integrity ambassadors and displayed some of their personal slogans for the campaign as well as a promotional video.

The Forum closed with a presentation of candidates seeking election to the BWF Council.