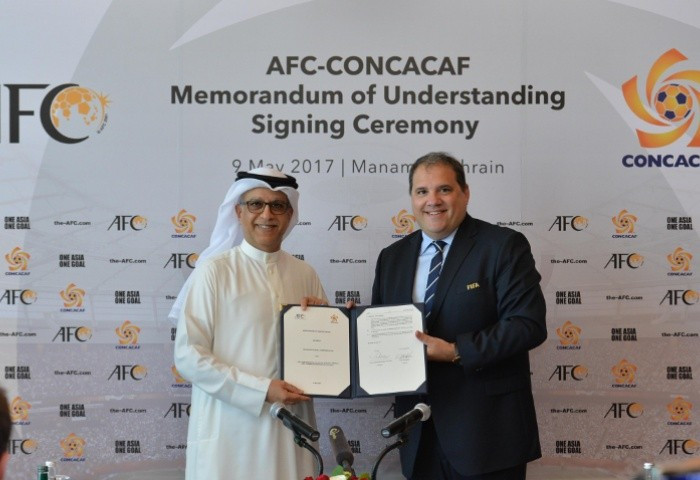 A Memorandum of Understanding (MoU) has been signed here today by the Confederation of North, Central American and Caribbean Association Football (CONCACAF) and the Asian Football Confederation (AFC).

The agreement was penned prior to the CONCACAF's Congress, due to take place tomorrow.

It centres on increased cooperation between the two confederations in areas including development, competitions and other other operational issues.

"It was about an exchange between the two confederations on development, administration and all the issues we can collaborate on where we might be strong in one area and vice-versa," Victor Montagliani, who was elected as President of CONCACAF in May of last year, said here.

"We didn’t have one with the AFC, we had an old one but I don’t think it was ever executed.

"I think it is just building bridges between the two Confederations.

"We look forward to collaboration in all those areas."

The agreement came prior to today's FIFA Council meeting here, where a CONCACAF-backed proposal for the United States, Canada and Mexico to be awarded the hosting rights for the 2026 tournament without a bidding process is expected to be given the support of the ruling body.

It is thought there is little opposition to the plan, which could see the three North American nations named as hosts as early as next year.

The plans were not part of the MoU, signed by Montagliani and AFC counterpart Sheikh Salman Bin Ibrahim Al Khalifa, who are both members of the FIFA Council.

"It includes aspects such as women’s football where we feel we can help as we have some countries which are quite strong in it," added Montagliani.

"On the competition side they have some issues with travel and things like that due to the size of their Confederation.

"On all facets of our day-to-day operations, there are ways in which we can help each other."

Sheikh Salman said the agreement represented the strengthening of existing ties between the AFC and CONCACAF.

"The AFC is a firm believer in strengthening our partnerships with our sister Confederations," he said.

"Today we further enhance the strong bonds that exist with our friends at CONCACAF.

“Our confederations share many challenges but more importantly, we also hold similar aspirations to build a brighter future for our great game.

"Through unity comes great strength, and this agreement will present new opportunities to draw on our strengths to bring about shared outcomes.”