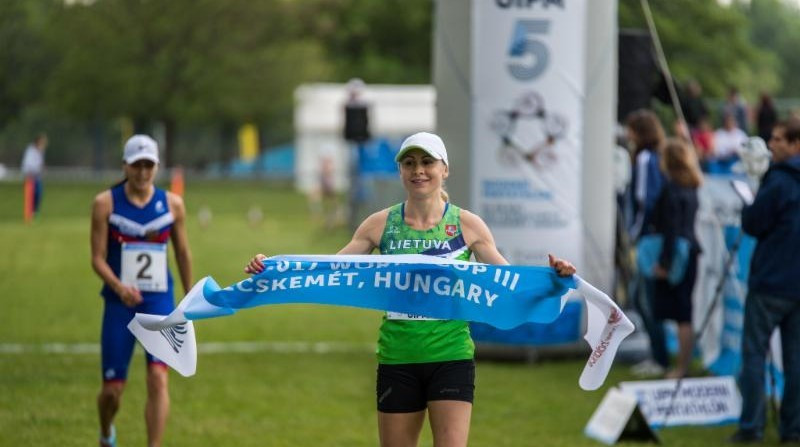 Asadauskaite, who won Olympic gold at London 2012, made light work of a 43 second deficit before the laser-run to deny Sarolta Kovacs of Hungary victory in front of her home crowd.

The result gave Asadauskaite her first podium finish of the 2017 season and a ninth individual gold of her World Cup career, and was thanks to a lightning fast run in a time of 11min and 52.49sec.

"It was a very good day, a very lucky day," said Asadauskaite.

"Everything went well and I am very happy.

Sarolta had a big lead at the start of laser-run but I always know that my running and shooting will be strong.

"I am very happy today."

Another strong laser-run performance came from Gulnaz Gubaydullina of Russia, who also overtook Kovacs at the third shoot and went on to claim silver, her first World Cup medal.

The Hungarian had to settle for the bronze.

Gubaydullina strengthened her reputation as one of the quickest swimmers in modern pentathlon as she produced a time of 2:07.88 in the pool earlier in the day.

Russia's Ekaterina Khuraskina proved to be the best fencer of the day, as she claimed 26 wins and eight defeats and added an extra point in the final bonus round bout by defeating Kovacs.

All of the leading women stayed in contention during a high-class exhibition of riding.

Japan's Ayumu Saito was the only rider to claim a perfect score of 300 but 15 athletes conceded eight penalties or fewer, including Kovacs who finished on 298, Gubaydullina who scored 296 and Asadauskaite who scored 292.

That meant Kovacs began the laser-run with a 33 second lead over Gubaydullina and was a further 10 seconds in front of Asadauskaite.

Immediately, the former Olympic champion made inroads, starting with a 10-second shoot, and it was at the third range that Kovacs stalled and was overtaken.

With exceptional shooting Gubaydullina moved into the lead, but within 100 metres of the third lap the decisive move came from Asadauskaite, who managed to cross the line first.

Action in Kecskemét is due to continue tomorrow with the men's final before the mixed relay on Monday (May 8).

The event is the third World Cup competition of the season.

The circuit is next due to head to Drzonkow in Poland for the penultimate competition of the regular season from May 25 to 29.

Vilnius in Lithuania is set to stage the World Cup Final from June 23 to 25.