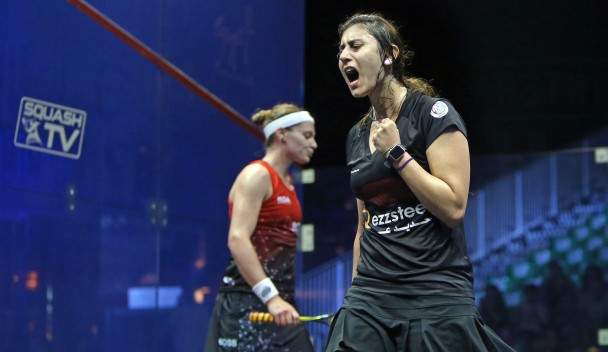 Egypt's Nour El Sherbini remains on course for a successful defence of her title as she reached the semi-finals of the Professional Squash Association (PSA) Women's World Championship in El Gouna.

The reigning world champion booked her place in the last four with a 11-6, 11-3, 12-10 victory over England's Sarah-Jane Perry.

El Sherbini produced a dominant attacking display in a straight games win against an in-form opponent, who reached the final of the British Open last month.

The Egyptian, the top seed at the tournament, will take on compatriot Nouran Gohar for a spot in the final after she overcame Malaysian Nicol David 11-6, 11-5, 11-9.

"I get a lot of support when I play here, I get a lot of people coming and it makes me push to win because I want to win in front of them," El Sherbini said.

"I'm happy that I'm through 3-0, it was nearly longer than that, but I'm happy to finish it in the third game.

"I think that the court conditions changed from the other days and it was hotter and bouncier.

"I just tried to change my plan and she was playing well at the end, but thankfully it worked and I managed to win the match."

In the men's El Gouna International Squash Open, Marwan Elshorbagy of Egypt claimed his second recent victory over brother Mohamed, the defending champion and top seed, to progress to the last four.

"I was focused from the first point to the last one.

"This is probably the best match I've played all season.

"Today couldn't have gone any better for me, but I think it was a bad day at the office for him."