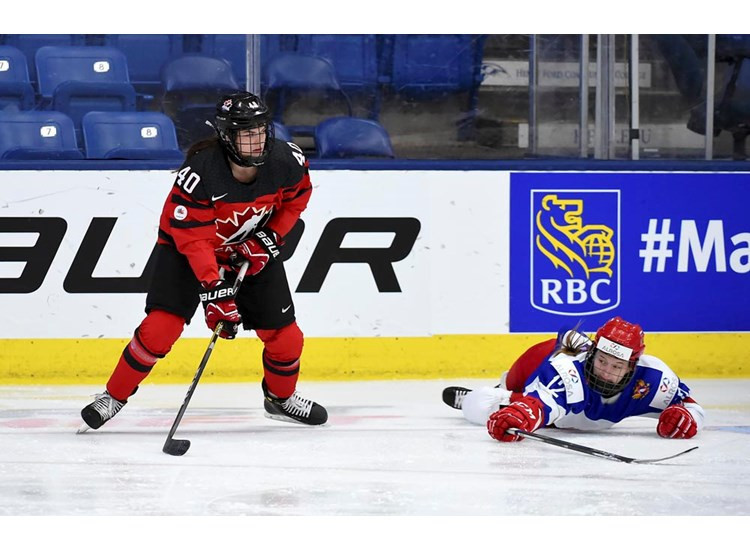 Canada finally got a win to their name at the International Ice Hockey Federation (IIHF) Women’s World Championship with a success over Russia today in Plymouth – progressing to the semi-finals at the same time.

Following losses to the hosts and bitter rivals United States and Finland, the Canadians managed to find their feet at the tournament with an 8-0 thrashing over their latest opponents in Group A.

After a quiet first 14 minutes, Canada broke through the Russian defence and opened the scoring with a Jennifer Wakefield strike.

This prompted a slump from the Russians as they conceded three more before the first period’s close as Emily Clarke and Natalie Spooner scored either side of another goal from Wakefield.

Erin Ambrose got the only score of the second period before Canada rounded off proceedings in the third with three more goals courtesy of Brianne Jenner, Meghan Agosta and Sarah Potomak.

They now head straight to the semi-finals after the US defeated Finland 5-3.

Susanna Tapani put the Europeans ahead in the fifth minute but the hosts levelled through a powerplay goal as Hilary Knight made the most of the Finnish having two players in the bin.

In the second period, the US got two more goals from powerplays, the first from Kendall Coyne and another from Knight.

However, Jenni Hiirikoski pulled one back for the Finnish with 24 seconds remaining in the period and just before the hallway point of the third, Michelle Karvinen got an equaliser.

But Hannah Brandt put the home side back ahead with seven minutes remaining before Jocelyne Lamoureux-Davidson scored an unassisted goal with a minute left after Finland had pulled their goaltender Noora Raty from the net to add an extra attacker on the rink.

Finland will now have to face neighbours Sweden in the quarter-finals tomorrow after the latter finished second in Group B.

The Swedes’ last match in the group saw them beat the Czech Republic 3-1.

Germany topped the group despite finishing the stage off with a 4-2 loss against Switzerland.

They will meet Russia in tomorrow’s second quarter-final, with the winner going on to meet the US in Thursday’s (April 6) semis.

Switzerland and the Czech Republic will meet in the relegation play-off, being played over the best of three games, with the first taking place tomorrow.