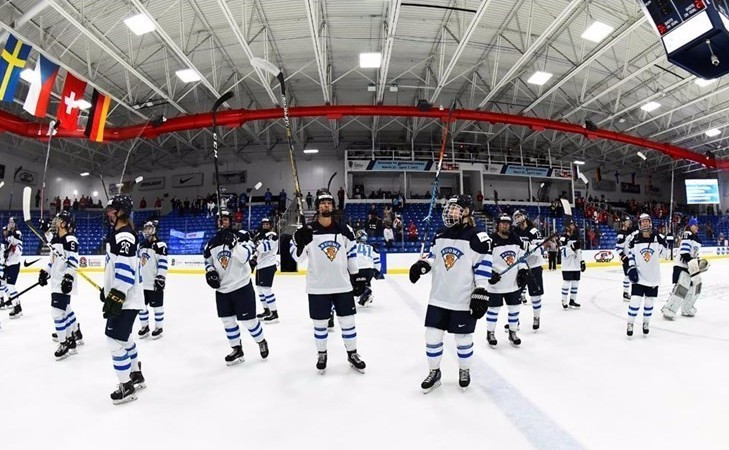 For the first time in the competition's history the Canadians lost a game to a country other than the United States as they were beaten 4-3 by Finland at the USA Hockey Arena.

The Europeans took the lead on three occasions, only for their opponents to level each time.

Sanni Hakala, Petra Nieminen and Susanna Tapani were all on the scoresheet for Finland while Erin Ambrose, Blayre Turnbull and Rebecca Johnston scored for the Canadians.

The decisive goal for the Finns came with just under two minutes left in regulation time when Ronja Savolainen intercepted a clearance and fired a quick shot that beat Genevieve Lacasse.

It was the first time in 21 meetings that Finland had secured a victory over Canada.

"When I got the puck, I just thought I had to shoot," Savolainen said.

"There were a lot of players in front of their goalie, and when it went in, it was like 'yes'.

"We felt good before the game.

The United States continued their strong start to the tournament with a comfortable 7-0 win over Russia, which followed their 2-0 victory against Canada.

Amanda Kessel opened the scoring in the first period before Coyne doubled the Americans' advantage with her first of the match.

Less than a minute passed before Lamoureux-Davidson added a third, and she then scored the fourth goal with only 28.3 seconds left in the middle period.

Decker added a fifth goal before adding her second after Coyne had completed her brace.

The win gives the US, who are only appearing with a full strength team on home ice after a pay dispute was resolved, six points at the top of the Group A standings.

It puts them in a strong position to guarantee a place in the semi-finals next week, with the top two progressing and the bottom two in the pool going into the quarter finals against Group B sides.

In Group B, Germany defeated the Czech Republic 2-1, while Sweden beat Switzerland by the same scoreline.

It means Germany have two wins on top of the group.

Tomorrow is a rest day with action due to resume on Monday (April 3).

The next round of fixtures in Group A sees the US take on Finland and Canada play Russia.

Germany will clash with Switzerland while the Czech Republic and Sweden also square off in Group B.