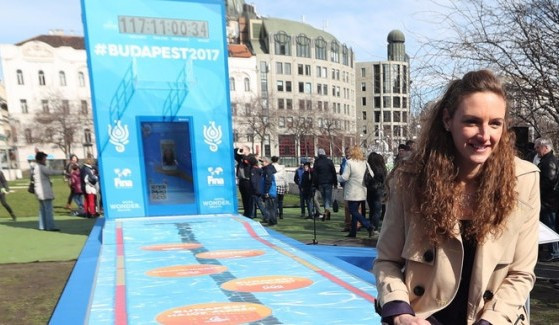 The clock will stand on Erzsebet Square in the heart of the Hungarian capital until the end of the Championships.

"For me, it is great that this year Budapest is hosting the FINA World Championships," said Hungary's Hosszú.

"It would have been a little bit difficult to fully regain my motivation after the Rio Games, where my dream of becoming an Olympic champion had come true.

"However, having the World Championships on home soil feels almost like another Olympics is coming up.

"I have already learned that racing in front of home crowds should make the competition even more inspiring, more fun - and not put extra pressure on the athlete.

"Having such a great number of fans supporting us is quite extraordinary, we only see the positive side of it.

"The anticipation gives me additional energy to swim those last couple of metres at my training, knowing what is waiting for me this summer."

The World Championships will be held between July 14 and 30, with the eyes of the world set to be on Budapest after their bid for the 2024 Olympics and Paralympics was withdrawn amid referendum fears.

Budapest stepped in to stage the event after original hosts, Mexican city Guadalajara, pulled out due to fears over falling oil prices in 2015.

The city was initially due to stage the 2021 edition, which has since been awarded to Fukuoka in Japan.

Five venues will be used in Budapest.

"The FINA World Championships are among the greatest and most popular sporting events of the world - it is followed by around six billion viewers internationally, while hundreds of thousands of spectators will have the chance to watch the action live," said Eva Szanto, the executive director of the Budapest 2017 Organising Committee.

"Not only the venues will be spectacular, but the competition itself as well.

"The heroes of the Rio Olympics will fight again in Budapest, and we will see the future greats of Tokyo 2020, and hopefully some great Hungarian triumphs, too.

"We will celebrate champions in a total of 75 events at the 17th FINA World Championships."