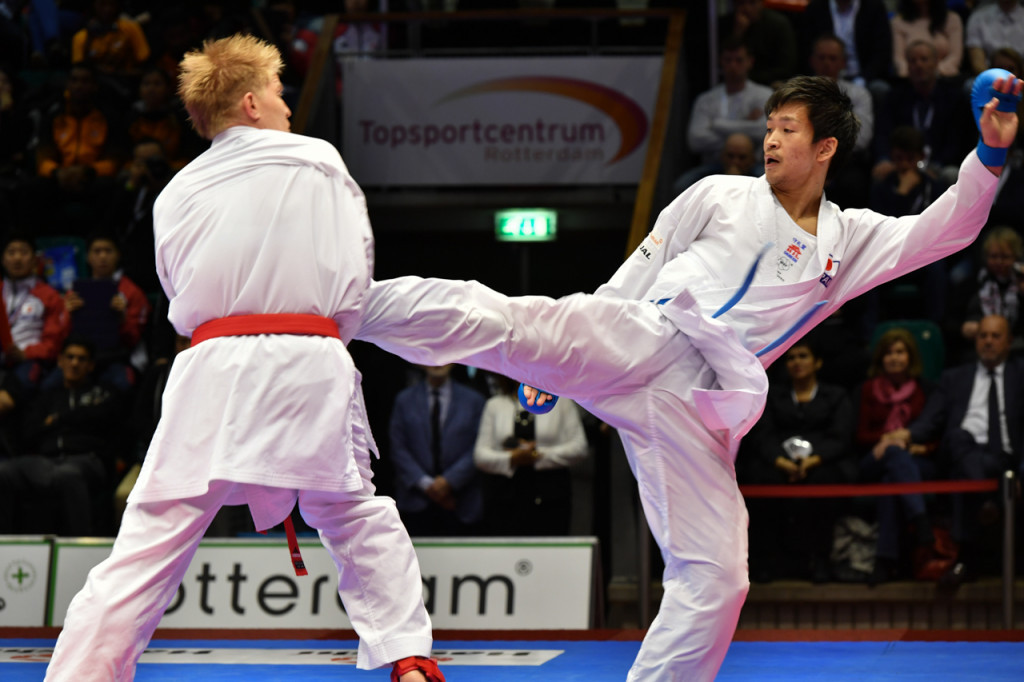 Japan claimed the men's and women's kata titles on their way to winning four gold medals on the final day of action at the Karate 1-Premier League event in Dutch city Rotterdam.

An all-Japanese women's kata final was won by two-time world champion Kiyou Shimizu at the expense of Hikaru Ono, who was followed onto the podium by Spain’s Sandra Sanchez and Hong Kong’s Mo Sheung Grace Lau.

Shimizu has not lost a bout in major tournaments since her debut in 2011 and ensured her 10th gold medal in international competitions with today's victory.

Japan’s two other triumphs at the Topsportcentre sports hall came courtesy of world champion Ryutaro Araga in the men’s kumite under 84 kilograms and Ayumi Uekusa in the women’s kumite over 68kg.

Steven beat Venezuela’s Andres Madera to the under 67kg crown as Georgia’s Davit Pataridze and Italy’s Gianluca De Vivo came away with the bronze medals.

Logan, meanwhile, overcame the United States’ Thomas Scott in the under 75kg final with the pair joined on the podium by Iran’s Ebrahim Hassan Beigi and France’s Corentin Seguy.

France’s other victory was in the women’s kumite under 50kg thanks to the performance of Alexandra Recchia, who defeated Morocco’s Aicha Sayah in the final.

Also making their mark on the gold medal standings today were Ukraine, whose karateka Anzhelika Terluyga triumphed in the women’s kumite under 55kg.

Ukraine’s Anita Serogina and Serbia’s Jovana Prekovic were the winners of the women’s under 61kg bronze medals, while those in the women's under 68kg went to France’s Alizee Agier and Greece’s Vasiliki Panetsidou.

Bronze medals in the men’s under 60kg were won by Morocco’s Abdessalam Ameknassi and Belgium’s Michael Dasoul and the third step of the men’s over 84kg podium featured Georgia’s Gogita Arkania and Iran’s Sajad Ganjzadeh.

The men’s team kata podium was headed by Morocco, with Indonesia second and France and Malaysia third.

Italy were represented twice on the women’s team kata podium, taking the gold medal and one of the two bronzes along with Germany.

They beat France in the battle for top spot.