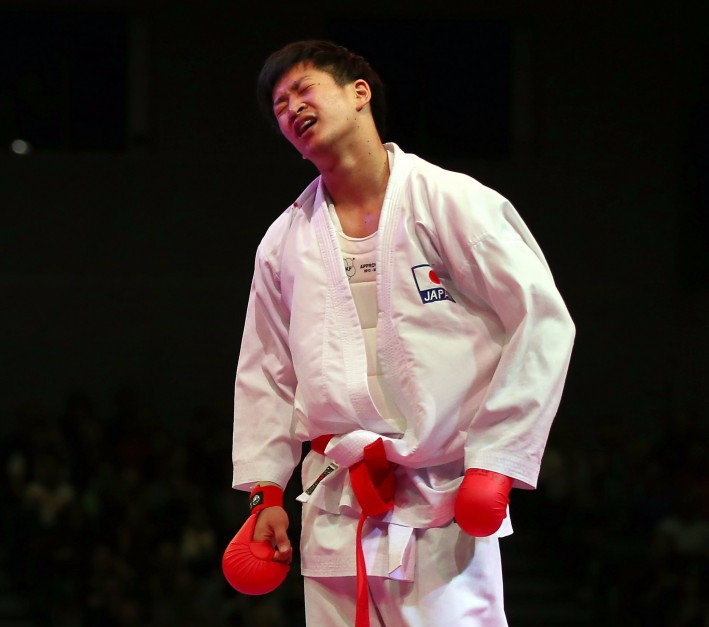 Ryutaro Araga of Japan, the reigning world champion, successfully made it through to the final of the men's under 84 kilograms competition at the Karate 1-Premier League event in Rotterdam today.

Araga squeezed past Valerii Chobotar of Ukraine 4-3 this evening at the Topsportcentre sports hall in the Dutch city.

The Japanese star has won medals in each of his eight Premier League appearances since 2015 and will hope to add to that record in tomorrow's final.

He faces an awkward opponent in the gold medal match, however.

Much to the delight of the Dutch crowd, the Netherlands' Rene Smaal also reached the final.

Roared on by the home crowd, Smaal defeated Ibrahim Nantumi of Saudi Arabia in the last four.

In the men's under 75kg competition, tomorrow's final will be contested between France's Logan Costa and Thomas Scott of the United States.

Costa successfully overcame Hsu Wei-Chun of Chinese Taipei 2-0 in their semi-final while Scott secured his place in the gold medal match after narrowly defeating Corentin Seguy of France 1-0.

In the heaviest male weight category of the week, over 84kg, Germany's Jonathan Horne produced a sensational display to reach the gold medal match.

The German collected a comfortable 8-0 win over Sajad Ganjzadeh of Iran in the semi-finals.

He will now meet Daniel Gaysinsky of Canada in the final after he got the better of Gogita Arkania of Georgia 4-1.

There was also action across four women's categories today with two world champions reaching the finals of their respective competitions.

World champion Alisa Buchinger successfully navigated her way through to the final of the under 68kg divison.

The Austrian saw off Vasiliki Panetsidou of Greece 3-0 in their last four encounter.

Buchinger will contest the final against Iryna Zaretska of Ukraine after she defeated France's Alizee Agier in the last four.

The Japanese karateka saw off France's Nancy Garcia 2-1 in the final.

Standing in her way of the gold medal is Anastasiya Stepashko of Ukraine, who squeezed past Eleni Chatziliadou of Greece in the semi-final.

Italy's Alesandra Hasani and Anzhelika Terluyga of Ukraine will contest the under 55kg final.

Haya Jumaa of Canada will square off against China's Yin Xiaoyan in the gold medal match of the under 61kg category.

Action in Rotterdam is due to finish tomorrow with the full schedule of gold and bronze medal matches.