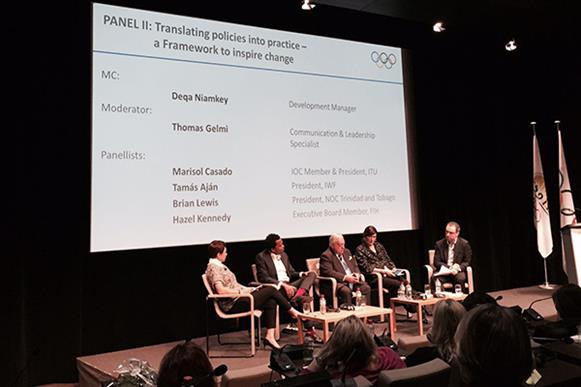 International Hockey Federation (FIH) Executive Board member Hazel Kennedy believes female sporting leaders need to be encouraged at a national level so that they can then makes strides globally.

Kennedy, secretary general of the National Olympic Committee of Zambia and President of the Zambian Hockey Federation, was involved at the International Federation Women in Leadership Forum in Lausanne.

She joined the panel discussion "Translating policies into practice - a framework to inspire change" at the second edition of the Forum.

The main focus of the event, which has attracted more than 60 people, is to train female attendees on how they can run for leadership positions within the world of sport.

"I believe the key is to support women empowerment at national level," said Kennedy.

She added: "If you do not develop female leaders at local and national level, you will not find them in international sport.

The Forum concludes today to coincide with International Women's Day.

Kennedy's sport of hockey is using International Women's Day to promote its claim that the sport is "equally amazing" for both genders.

The sport is played by a many girls and women as boys and men, the FIH claim.