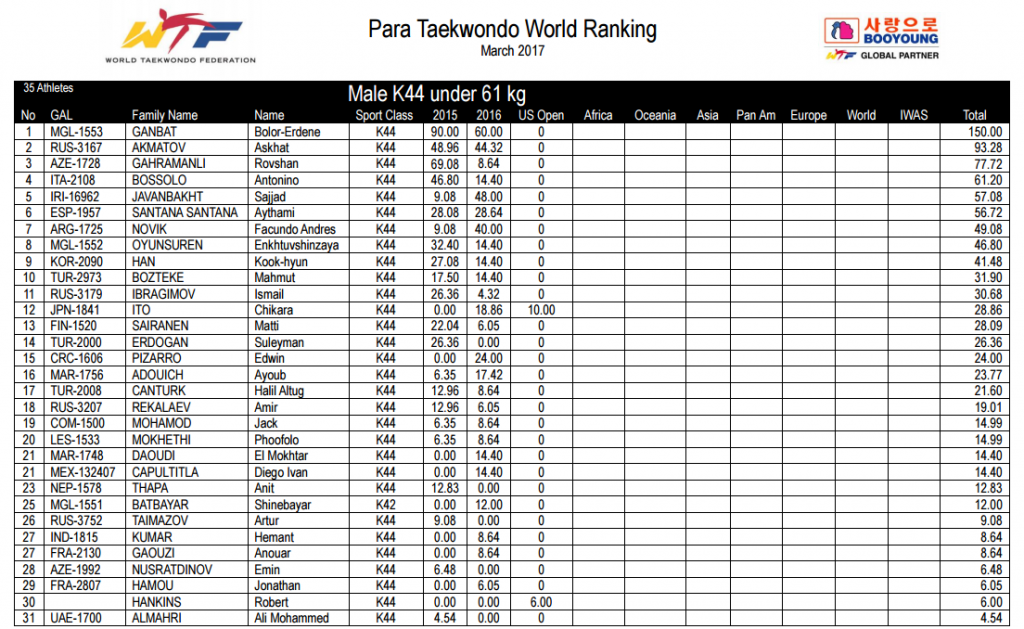 Japan’s Chikara Ito has moved up six positions to 12th in the K44 men’s under 61 kilograms Para-taekwondo world rankings after winning top honours at last month’s US Open in Las Vegas.

Other changes to the rankings released by the World Taekwondo Federation (WTF) include the United States’ Felix Sabates jumping three places to fifth in the K44 men’s under 75kg.

Compatriot Daniel Espinosa has risen from sixth to fifth place in the K42 men’s under 75kg, while Mexico’s Francisco Pedroza has moved up from ninth to sixth in the K44 men’s over 75kg.

Results from the US Open saw a total of 10 new athletes - five men and five women - enter the world rankings for the first time.

The event was the first Para-taekwondo competition of 2017.

It featured matches across various kyorugi classes and intellectually impaired poomsae P20 and motor impaired P30 classes, as the WTF continues to strive to honour its commitment to providing opportunities for all athletes.

A total of 25 athletes from nine different countries took part.

Twelve of those were competing at an international Para-taekwondo event for the first time, including Shauna-Kay Hines, who became the first Jamaican to win a medal at such a competition.

Hines took home silver following a 5-4 defeat against American Brianna Salinaro in the final of the women’s K44 under 58kg division.