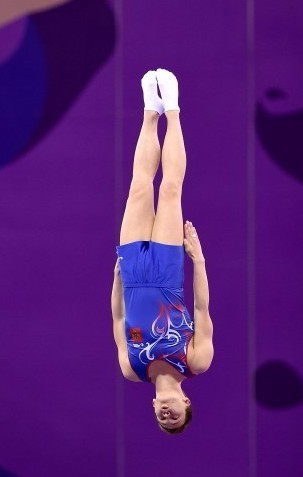 Mikhail Melnik claimed victory in the men's event at the National Gymnastics Arena in the Azerbaijani capital.

He finished third in the qualification standings yesterday, but improved today by scoring a total of 60.535 points in today's final to take the gold medal.

Azerbaijani gymnast Ilya Grishunin delighted the home crowd by taking silver with a score of 59.89.

Portugal's Diego Abreu completed the top three with a total of 59.085.

It was a disappointing day for Rio 2016 men's individual gold medallist Uladzislau Hancharou of Belarus as he finished in seventh.

Further Russian success soon followed in the women's competition as Susana Kochesok proved too strong for the rest of the field.

Kochesok scored 55.615 in today's routine to narrowly edge compatriot Yana Pavlova, the leader in yesterday's qualification, who scored 55.545 which saw her finish in second place.

Russian domination came to a swift end in the synchronised competitions as Kazakhstan's Pirmammad Aliyev and Danil Mussabayev took gold in the men's event.

The Kazakh duo produced a score of 51.400 to finish ahead of Melnik and Oleg Selyutin of Russia who took second on 50.850.

Japan's Katsufumi Tasaki and Tetsuya Sotomura rounded out the podium with the score of 50.700.

Belarus reigned supreme in the women's synchronised event with Hanna Harchonak and Tatsiana Piatrenia claiming top spot with a total of 49.400.

Hosts Azerbaijan were forced to settle for silver with Sviatlana Makshtarova and Veronika Zemlianaia finishing in second on 46.350.

Third place was claimed by Portugal's Beatriz Martins and Silvia Saiote who's routine earned them 45.050.

Competition also concluded in the men's and women's tumbling events.

Grigory Noskov of Russia took gold in the men's event with his score of 74.600.

Home favourite Mikhail Malkin took second on 72.100 while Elliot Browne of Great Britain secured bronze with a score of 71.900.