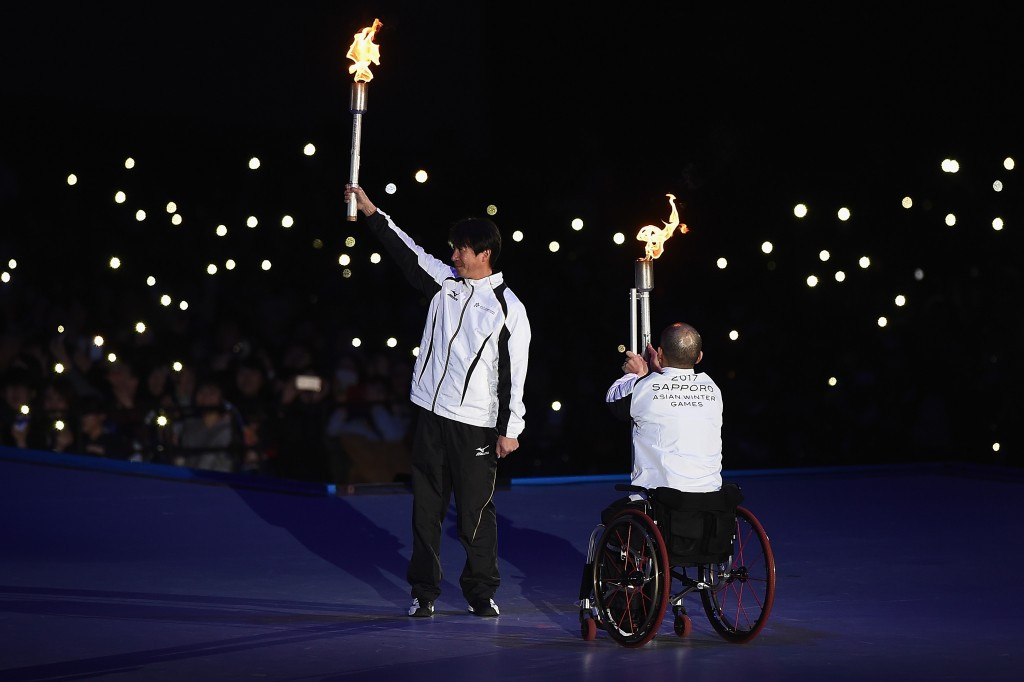 Harada, who produced a poor final jump at the Lillehammer 1994 Olympics to see his team fall from first to second before inspiring them to a home gold medal four years later in Nagano, arrived on stage to receive the Asian Winter Games Torch.

He then lit a cauldron before four fireworks theatrically erupted in the indoor stadium.

Crown Prince Naruhito, whose presence had not been widely publicised beforehand for security reasons, had earlier officially declared the Games open to a rousing reception.

Unity and overcoming adversity were the central themes of today's event.

The build-up had been dominated by Chinese and South Korean concerns about books denying the 1937 Nanjing Massacre left in hotel rooms to be used by athletes.

Athletes from all nations received loud cheers from an enthusiastic crowd today, however, in a good show of continental solidarity.

This included for a seven-strong team from North Korea given special permission to enter Japan, as well as for athletes from Australia and New Zealand participating at an Olympic Council of Asia (OCA) event for the first time.

OCA President Sheikh Ahmad singled out the Oceanic participation as a special factor which should make the Games historic.

The two nations are featuring as "guests" so will not be eligible to win medals, but paraded alongside all other teams.

"These Games will show the potential of Asia to the world," added Sapporo 2017 President Katsuhiro Akimoto.

"We have great expectations for the spectacular athletic performances of over 2,000 athletes."

Japan and South Korea received the first two gold medals of the Games after victory for home star Eri Yanetani in the women's parallel giant slalom snowboarding was followed by a win for Lee Sang-ho in the corresponding men's event.

It formed a nice athlete-centred part of a Ceremony which had a 4pm start-time in order to make it easier for those competing tomorrow to attend.

Special buses were also in operation throughout the event to allow athletes to leave the arena.

This, however, did lead to a slightly stagnated vibe as the ceremony was split into three specific parts separated by brief pauses.

The first, which included the speeches and parade, consisted of protocol and all the formalities.

Part two saw a series of tributes to Sapporo and Japanese culture, including both traditional and modern dances, as well as the Games' flying squirrel mascot, Ezomon.

Many athletes and dignitaries had left by this stage, but the performance prompted a great response from the crowd before being greeted with a standing ovation.

Seven days of sporting competition are now due to take place before action concludes with a Closing Ceremony a week today.