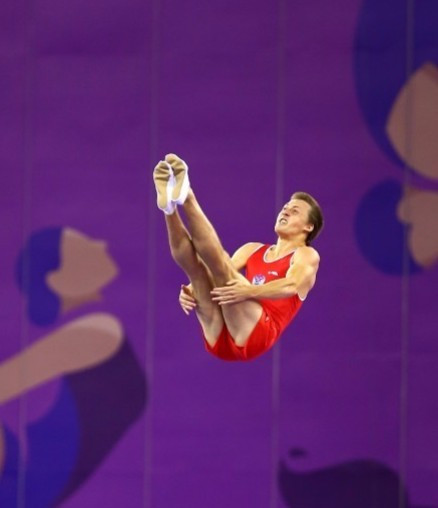 Ushakov produced a combined score of 112.99 points from his two attempts in the National Gymnastics Arena to top the standings ahead of Rio 2016 men's individual gold medallist Uladzislau Hancharou of Belarus.

Hancharou took second with his score of 112.055 while another Russian, Mikhail Melnik, finished in third with 111.285.

Azerbaijani gymnast Ilya Grishunin also reached the finals on 110.715 much to the delight of the home crowd.

Aleh Rabtsau of Belarus, Portugal's Diogo Abreu, Kazakhstan's Pirmammad Aliyev and Masaki Ito of Japan also made it through to tomorrow's final.

Russia and Belarus also dominated the qualification in the women's individual programme.

Susana Kochesok of Russia finished in third with 102.925 while another Belorussian Gymnast, Tatyana Pyatrenya, finished in fourth with 101.775.

Qualification also took place in the men's and women's tumbling disciplines today with Russia's Grigory Noskov leading the way in the men's competition.

Noskov scored 73.300 to finish ahead of British duo Kallum Mulhall and Elliott Browne, who took second and third on 69.700 and 66.900 respectively.

There was further British success in the women's tumbling event as Lucie Colebeck finished top of the standings on 68.000.

South Africa's Bianca Zoonekynd clinched second on 65,100 with Lea Callon of France in third on 64,700.

Finals are due to bring action to a close at the National Gymnastics Arena tomorrow.