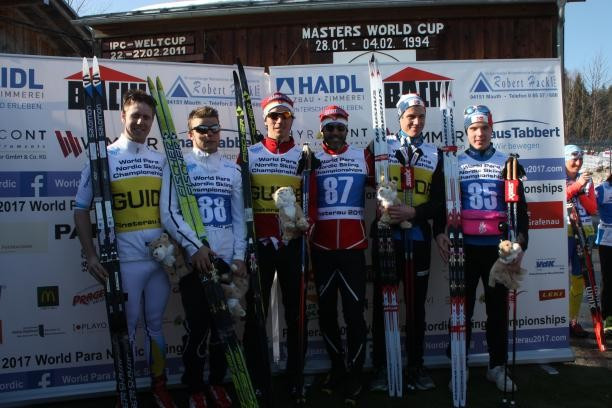 The 10-time Paralympic gold medallist was the only skier to break the hour mark as he finished the course in 57min 35.4sec with guide Graham Nishikawa.

"It was much faster in the draft behind [him], and so the fact that he could stay in front for four laps out of five helped me out a lot and gave me a cushion to push a little bit at the end and increase the gap.

"In the end it was more comfortable than it could have been.

"The technicians did the best job today."

Canada will host the next edition of the Championships in 2019, in Prince George.

Norway’s Eirik Bye was timed at 1:00:58.8 for bronze with guide Arvid Nelson.

Guided by brother Juluan Josef, the teenager clocked 55:40.1 to add to her sprint title.

Ukraine’s Oksana Shyshkova finished in 57:11.9 for silver, while guided by Vitalii Kazakov.

Shyshkova was joined on the podium by team-mate Olga Prylutska who finished in 1:00:01.8 for bronze with Lada Nesterenko.

In the men's sitting, Ukraine's Maksym Yarovyi came home in 40:32.4 for gold, as the 27-year-old upgraded his silver medal from the 2015 Championships in Cable in the United States.

South Korea’s Eui Hyun Sin, a medal hope for the host nation at next year's Pyeongchang Winter Paralympics, added silver to his biathlon bronze in 40:56.7.

Oksana Masters triumphed in the women's sitting for the US, making it two world titles in Finsterau after her sprint gold.

Masters, a skier and rower who has won medals at both the Winter and Summer Paralympic Games, came home in 36:01.0.

Norway’s Birgit Skarstein finished in 36:51.7 for her first World Championship medal as Andrea Eskau ended in 37:00.0 for bronze.

Ukraine struck gold in both the standing races.

Ihor Reptyukh upgraded his bronze from Cable to gold with a winning men's time of 58:03.1.

In the women's race Oleksandra Kononova retained her world title in 51:56.9 despite dropping to third at one stage.

She recovered to fend off team-mates Iuliia Batenkova and Liudmyla Liashenko who finished in 53:38.1 and 53.59.4 respectively as Ukraine clinched a 1-2-3.

Tomorrow is a rest day in Finsterau, with action resuming on Saturday (February 18) with sprint biathlon.