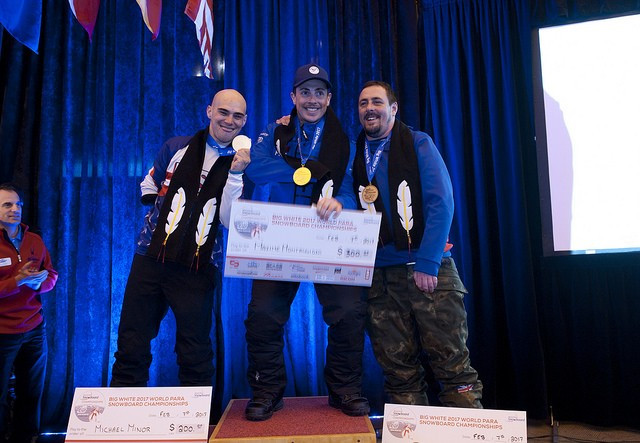 The Frenchman secured his first-ever world title in the discipline as he recorded a best time of 1min 10.65sec.

Minor, the defending World Cup champion who was unbeaten in the current campaign until today, had to settle for silver, while Britain’s Ben Moore claimed bronze.

“I saw that Minor was so fast, so in my second run I tried to do better,” Montaggioni said.

“It did, but it was not enough.

“And the last run I said I have nothing to lose and to just go down as fast as I can.

“In this moment, I’m just happy. I’m smiling a lot.

“I just want to go with my team to celebrate this incredible feeling.”

Finland's Matti Suur-Hamari won his second gold of the event in Big White as he added the banked slalom crown to his snowboard cross title.

Suur-Hamari clocked 1:07.82 to pip Britain’s Owen Pick to top spot on the podium, while Japan’s Gurimu Narita continued his excellent run of form so far this season with bronze.

Formidable Dutch duo Bibian Mentel-Spee and Chris Vos each sealed their second titles of this year’s World Championships as they won the women’s SB-LL2 and men’s SB-LL1 events respectively.

Joany Badenhorst of Australia rounded out the podium as she took home the bronze medal.

Vos proved far too strong for the rest of the field in the men’s event, wrapping up his fourth world title after he stopped the clock at 1:12.71.

Mike Schultz of the United States finished in silver medal position, while Reinhold Schett of Austria was third.

The women’s SB-LL1 crown went the way of American Brenna Huckaby, who also ended the World Championships with two gold.