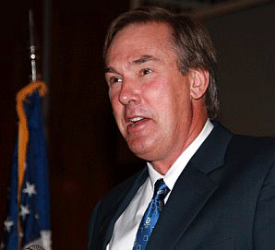 Chuck Wielgus will retire from his post as USA Swimming's executive director later this year, after more than 20 years in the role.

The American joined USA Swimming in his current role in July 1997, and is the longest-tenured current chief executive of an Olympic national governing body in the US.

He will, however, retire on August 31 despite USA Swimming extending his contract through to the end of 2020 back in February.

Wielgus’ contract was due to come to an end after the Rio 2016 Olympic Games, but the extension contracted him to Tokyo 2020.

"This has been a long and difficult decision because I love USA Swimming and I have always approached my role with enthusiasm and passion," 66-year-old Wielgus said.

"It has been an honour and a privilege to walk through the doors every day at USA Swimming with our dedicated and talented staff and work in service to our athletes, coaches, officials and volunteers who comprise the membership of our wonderful organisation.

"I believe with all my heart that USA Swimming’s best years are ahead.

"I am confident that the work we have done these past two decades has established a firm foundation upon which future growth can occur."

Under Wielgus’ direction, USA Swimming has enjoyed an extended period of success, winning 156 swimming medals across the last five Olympic Games, including 70 golds.

Twenty-three of these were won by Michael Phelps, the world's most successful Olympian of all time.

Membership numbers have also doubled to more than 400,000 under Wielgus' leadership.

Wielgus also oversaw the formation of the USA Swimming Foundation, which aims to provide financial support for national team athletes and save lives through swim lessons with the 'Make A Splash' initiative.

To date the programme has awarded more than $4 million (£3.2 million/€3.75 million) in grants to swim lesson providers, and provided lessons for more than four million children.

"During his almost 20 years as executive director, Chuck has raised the bar for how a chief executive in Olympic sports is measured," added USA Swimming Board of Directors chair Jim Sheehan.

"He has taken USA Swimming places no-one could have imagined 20 years ago.

"From making our Olympic Trials into a world-class event and creating the USA Swimming Foundation to leading a national governing body that has been the top producer of podium finishes at the Olympic Games, Chuck has done more than any other person for USA Swimming."

He had been at the centre of a very public battle between himself and the victims of swim coaches, culminating with his withdrawal from the 2014 International Swimming Hall of Fame induction ceremony.

Although not directly involved in any of the abuse, Wielgus was criticised for allegedly turning a blind eye to the scandal within USA Swimming with an online petition set up to bring about his removal.

In 2011, Wielgus was named the winner of the Great Comebacks National Award, following his diagnosis of Stage III colorectal cancer and ostomy surgery in 2006.