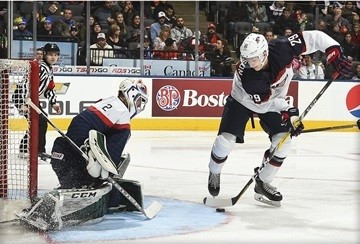 The United States put in an impressive display as they beat Slovakia 5-2 to record their second victory of the International Ice Hockey Federation (IIHF) World Junior Championships at the Centre Bell in Montreal.

Tanner Laczynski, Colin White, Tage Thompson, Charlie McAvoy and Troy Terry all got on the scoresheet for the Americans, who moved into top spot in Group B.

In the other match to take place today, Sweden overcame Switzerland 4-2 in Group A at the Air Canada Centre in Toronto.

The US, bronze medallists at last year’s World Junior Championships, dominated the contest against Slovakia from start to finish and took the lead when Laczynski followed up his own shot to find the net with the rebound.

A mistake by Slovakian goalkeeper Andrej Hatala allowed White to double the American advantage as he tapped the puck home from close range.

The Slovakians, who were soundly beaten by Canada in their opening match at the tournament, fought back and halved the deficit late in the first period through Martin Fehervary.

It proved to be a fleeting moment of joy for Slovakia as the US restored their two-goal lead early in the second when Thompson spun and struck an unstoppable effort high into the net.

Quick-fire goals from McAvoy and Terry put the result of the contest beyond all doubt, with Michal Roman netting a consolation goal for Slovakia in the third period.

“We were focused and ready to play," American captain Luke Kunin.

"We did what we needed to do to be successful.

“We needed to get a good start and get pucks to the net.

“Everyone on the team contributed."

Sweden’s captain Joel Eriksson Ek was integral to his side’s success as he scored twice to help them to victory over Switzerland.

Ek opened the scoring in the first period before Jonas Siegenthaler restored parity for the Swiss.

Lias Andersson then finished off a well-worked move to edge Sweden 2-1 ahead but the Swiss team equalised once again thanks to Calvin Thurkauf’s effort in the second period.

With the game locked at two goals apiece, Ek put Sweden back in front before Lucas Carlsson rounded off the win late on.

Tomorrow's action sees Denmark take on the Czech Republic, while defending champions Finland go in search of their first victory when they play Sweden.

In Group B, hosts Canada play Latvia and the US entertain Russia.