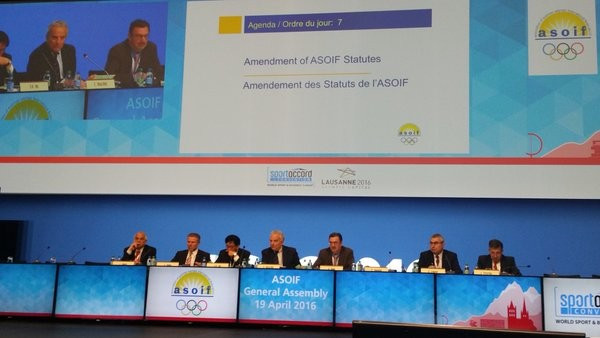 Budapest, Los Angeles and Paris will all give a "short introduction" to their 2024 projects at the Association of Summer Olympic International Federations (ASOIF) General Assembly in Aarhus on April 4, insidethegames has been told.

The move, introduced by the International Olympic Committee (IOC) following a request from ASOIF, is designed to enable sporting bodies to glean more information about the Olympic and Paralympic contenders ahead of a choice being made in Lima on September 13.

It will take place at a meeting held during the SportAccord Convention in the Danish city, an event where Olympic bid presentations were traditionally held before being scrapped during last year's race for the 2022 Games.

The IOC avoided using the specific term "presentation" when describing the change today.

"Following recent discussions with the Candidate Cities, ASOIF has expressed to the IOC that it would welcome a short introduction to the 2024 Olympic Games projects prior to the Candidate City Briefing for IOC Members and Summer Olympic International Federations which will take place in Lausanne next July," a spokesperson told insidethegames in a statement.

"The ASOIF General Assembly will be held on April 4, 2017 in Aarhus, Denmark, where the SportAccord Convention will also be taking place.

"As the cities will be attending the Convention and there will thus be no additional cost for them, the IOC has given its agreement for the three Candidate Cities to give a short introduction to their projects to the ASOIF General Assembly."

It is not yet clear how long each of the three cities will speak for or whether there will be any sort of question and answer format.

But the move means that Denmark will once again play a key role in an Olympic bidding race after Copenhagen played host to the IOC Session at which Rio de Janeiro was awarded the 2016 Games in 2009.

The annual week-long SportAccord Convention, first held in 2003, had long been a key stepping stone in bidding contests, including three years ago in the race for the 2020 Olympics, where Istanbul, Madrid and Tokyo were each allocated 20 minutes to present their bids to delegates in Saint Petersburg.

This was seen as a significant turning point in a process that eventually led to the Japanese capital being awarded the Games for the first time since 1964.

The decision to hold no 2022 presentations last year, ostensibly made to cut the cost of bidding as part of the Agenda 2020 reform process, was a major factor contributing to then SportAccord President Marius Vizer's fierce criticisms of the IOC and its President Thomas Bach during the 2015 Convention in Sochi.

However, concerns have since been raised as to the lack of opportunities for the 2024 candidates to formally present their bids.

Initial presentations were given at last month's Association of National Olympic Committees General Assembly in Doha, but no others were scheduled until an IOC Candidate City Briefing likely to be held in Lausanne in early July.

A third and final presentation would then take place at the IOC Session in Lima on September 13 where a final choice will be made.

The ASOIF meeting, which is always fully open to the media, consists of representatives from the 28 Summer Olympic sport as well as the five new ones added to the programme for Tokyo 2020.

It is thus an audience with a more direct stake in the Games as well as a more politically convenient choice than holding it elsewhere during the week.

All three bid cities have already been banned from having formal exhibitions during the SportAccord Convention.

insidethegames understands that the IOC were initially reluctant to introduce more presentations but are thought to have been convinced of its merit by ASOIF.

The body have vowed to play a more direct role in Olympic preparations following the problems faced in the build-up to Rio 2016.

It can be presumed that they will be more interested in detailed technical aspects of the bids rather than fundamental concepts.

At least eight voting IOC members should also be present as they are also either the President, secretary general or vice-president of a Summer Olympic Federation.

"They could be held during the ASOIF General Assembly so only International Federations on the Olympic programme would be presented to.

"We would also like to see more technical presentations focusing on the specific needs of the IFs."