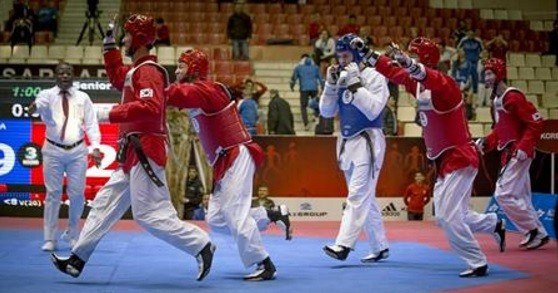 Azerbaijan, Belgium, South Korea and Turkey all reached the last four of the men's event while Iran, Russia and the United States missed-out.

The Championships pit seven male and eight female teams against one another.

Each team consisted of five athletes, plus one substitute, with a weight cap for the full team.

The first round featured numbered athletes, ranked from the lightest to the heaviest, fighting their counterparts on the opposing team in turn.

The two subsequent rounds were fought using a tag-team format, with 15 full point penalties or a 30 point gap resulting in a loss.

No video replays were used to ensure "non-stop" action.

By the end of today's action, which took place in a round-robin format with each team fighting every other team, the semi-finalists had been decided.

South Korea finished atop the men's Group A standings after winning two and losing just one of their three matches today.

Turkey boasted the same record as their Asian rivals, finishing second to them after having a worse points difference.

Russia and Iran finished third and fourth respectively after managing only a single win each.

In Group B Azerbaijan looked in ominous form as they secured progression to the last four with a 100 per cent record today.

They easily dispatched rivals Belgium and the US, conceding a mere 12 points in the process.

South Korea will now take on Belgium in tomorrow's semi-finals while Azerbaijan meet Turkey for a place in the gold medal match.

In the women's competition China, South Korea, Russia and Turkey are all through.

China and South Korea both dominated Groups A and B respectively after winning all three of their contests.

The Chinese team dispatched Russia, Italy and France with ease while their Korean rivals overcame Turkey, Azerbaijan and the US.

China face Turkey for a place in the final while Russia meet South Korea in the other semi-final encounter.

Belgium, South Korea, Russia and the United States are all set to compete in the inaugural mixed competition.

In the mixed gender event, two men and two women will make up each country's team although there will be no male against female combat.