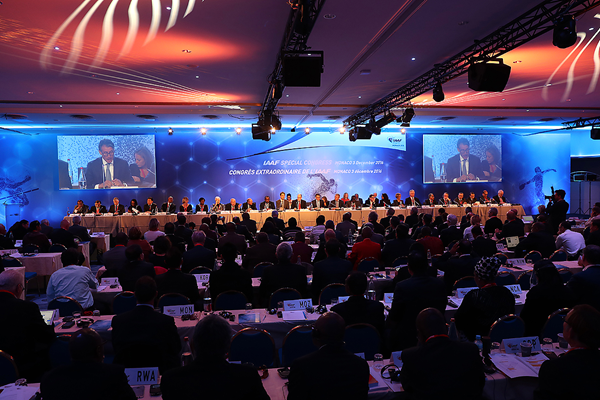 Sebastian Coe, the International Association of Athletics Federations (IAAF) President, today saw members of the Special Congress vote in his far-reaching reforms by 182 votes to 10 after urging delegates at the start of the meeting to protect the future of their sport.

Referring to a year in which athletics has been mired in allegations of corruption that have seen former President Lamine Diack become the subject of a French police investigation, Coe told the 197 delegates at the start of the meeting: "We cannot let this happen again.

"We must protect our sport."

A total of 42 Federation members spoke before the Congress moved to the vote.

There were no votes recorded from Jamaica, Oman, Senegal, Ukraine and Uzbekistan.

It was clearly a concern, and in some cases a surprise, for several members that the results of their votes would be displayed openly on a big screen at the conclusion.

Coe concluded: "This is a very important moment in the history of our sport.

"I would like to thank all of you delegates for the trust you have shown in us."

Candidates were asked to vote either "yes" or "no" to the introduction of a package involving two Constitutions, one of which will come into force next year and the other in 2019.

To quote from the Time For Change document in which the constitutional changes are being presented, these involve “"re-defining roles and responsibilities including empowering Member Federations and ensuring stronger Area representation", "a greater voice for athletes", "a better gender balance" and "independent anti-doping, integrity and disciplinary functions".

The bulk of the President’s power, used so autocratically, and then disastrously, down the years, will be devolved to the IAAF’s chief executive, a role to which Olivier Gers was appointed in August.

There will a re-shaped IAAF Council of 26 elected members, dealing primarily with sporting issues, and a newly formed Executive Board that will have more to do with business, sponsorship contracts and planning.

The sticking points for some Federations were the targets for gender change - the proposal to have 50-50 representation by 2023 was eased to 2027 in the weeks before the vote - and tenure in the IAAF Council, which will now be three terms of four-year office.

The IAAF Council voted in the changes at their meeting during Rio 2016 and Coe has since presented a "roadshow" across the continents listening to reactions and - to judge by many of the speakers today - acting on some if not all of their concerns.

The overwhelming tenor of the contributions was positive, although several members made it clear they were not entirely happy with all details of the two Constitutions for 2017 and 2019 which were voted on as a single entity.

The Zambian delegate, Elias Mpondela, commented:  "Long embedded rigidities are difficult to remove, but we must congratulate our President for taking a bold step to move rapidly.

"Only when you fall can you know that you need to stand up.

"Events must be appreciated today because they are the very reasons why we are making this significant change.”

Members for Kazakhstan and Uzbekistan said that a no vote should not indicate countries not wishing to change the sport, but felt that it was wrong to have only the option of a "yes" or a "no", adding that it would be better procedure to vote on each separate part.

Coe recalled the time a year ago when he was obliged to stand before a  British Government inquiry to explain the circumstances which had led to widespread allegations of corruption at the top of the IAAF.

"The question I was asked, again and again, was why didn’t anyone on the executive board or on the IAAF Council know what was happening?" Coe said.

"And what I said was that the walls were too high to see over, that too much power was in the hands of too few people.

"I didn’t shirk the question.

"Of course we should have known more.

"We did ask questions, and we did get answers, but without the formal checks and balances that one might expect of a modern organisation, we could not verify those answers."

Referring to the allegations of "grotesque amounts of money" being secretly transferred that have been revealed by the French police investigation, Coe added: "If there were large amounts of money taken and paid into other people’s bank accounts then you should all feel violated, because of course this is your money.

"This money could have been used for the development of the sport in your area, your region, your country.

"It could have developed the sport in your schools, built tracks and facilities in your cities.

"It’s bad enough that all this has happened. We cannot  have this happen for a second time.

"We have to step up to ensure  that the walls are never too high again and that all the necessary checks and balances are in place.

"I would not have asked for changes unless I thought that we had to change.

"So I ask you once again to hold up the torch of our sport.

"Today this sport needs your support."

To read the full document, Time for Change, click here.