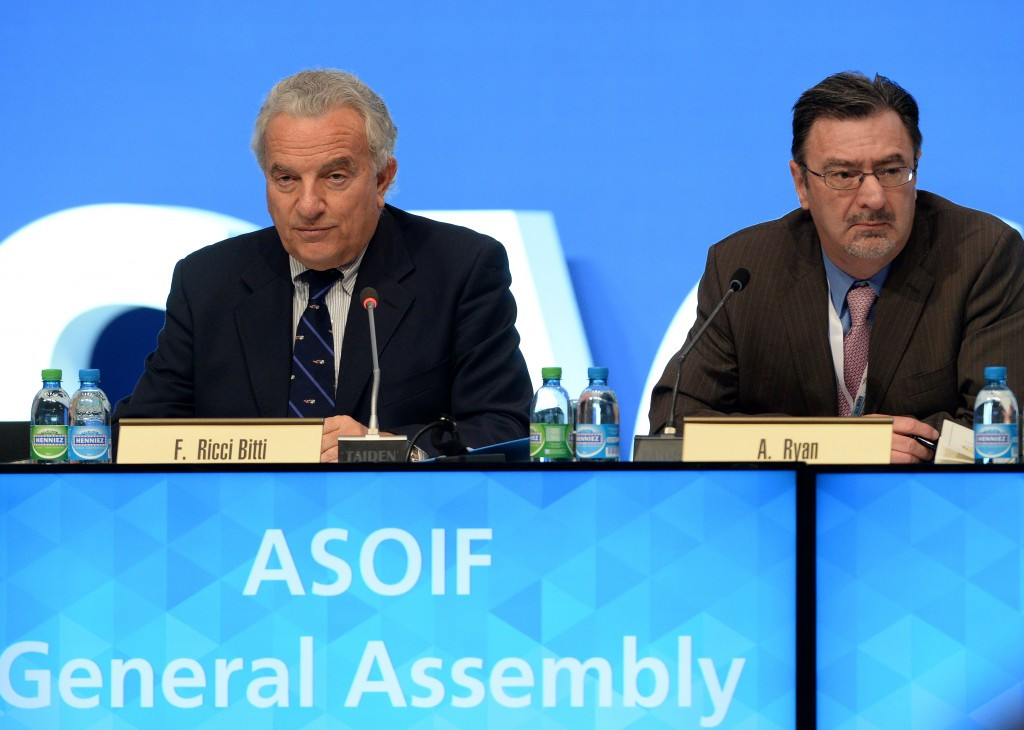 Association of Summer Olympic International Federations (ASOIF) President Francesco Ricci Bitti believes cities bidding for the 2024 Games should be able to give presentations during their General Assembly at the SportAccord Convention in April.

Olympic and Paralympic bid presentations have historically been given during the week-long meeting but the practice was scrapped by the International Olympic Committee (IOC) during the 2022 Winter race last year.

This decision, ostensibly made in order to cut the cost of bidding as part of the Agenda 2020 reform process, was a major factor contributing to then SportAccord President Marius Vizer's fierce criticisms of the IOC and its President Thomas Bach during the 2015 Convention in Sochi.

Since then, SportAccord's influence has reduced and no move has been made to reintroduce presentations at next year's Convention in Aarhus in Denmark from April 2 to 7.

Budapest, Los Angeles and Paris - the three cities still in the race for the 2024 Games - have also been banned from formally exhibiting their bids during the event.

But Ricci Bitti, the Italian who also chairs the SportAccord Convention, believes presentations should be reintroduced.

"We support the idea of presentations taking place there," he told insidethegames here at today's Rio 2016 debrief.

"They could be held during the ASOIF General Assembly so only International Federations on the Olympic programme would be presented to.

"We would also like to see more technical presentations focusing on the specific needs of the IFs."

Holding the presentations during the ASOIF meeting would make it politically easier for the IOC to re-introduce them, it is thought, while also cutting out the practice of Federations not on the Olympic programme being presented to, as had happened at previous SportAccord Conventions.

As well as the 28 Summer Olympic sports, the five new sports added to the Tokyo 2020 programme are also invited to the ASOIF General Assembly next year.

These five - baseball and softball, karate, skateboarding, sport climbing and surfing - would have to undergo a separate process to be included at the 2024 Games.

The annual week-long SportAccord Convention, first held in 2003, had long been a key stepping stone in bidding contests, including three years ago in the race for the 2020 Olympics, where Istanbul, Madrid and Tokyo were each allocated 20 minutes to present their bids to delegates in Saint Petersburg.

This was seen as a significant turning point in a process that eventually led to the Japanese capital being awarded the Games for the first time since 1964.

Rio de Janeiro's presentation during the 2009 Convention in Denver was also seen as a major turning point towards them being awarded the 2016 Games later that year in Copenhagen.

A first bid presentation in the 2024 race took place at this month's Association of National Olympic Committees General Assembly in Doha.

At present, however, no more are scheduled until an IOC Candidate City Briefing likely to be held in Lausanne in early July.

A third and final presentation would then take place at the IOC Session in Lima on September 13 where a final choice will be made.

There is also currently no formal opportunity for IFs to be presented to, although in the 2022 race they were invited to the Candidate City Briefing.

All three bid cities are thought to be desperate to have additional opportunities to formally showcase their respective bids.

This comes as a backlash grows against IOC cost-cutting measures which many believe are becoming increasingly repressive and limiting.

In February, Paris' Mayor Anne Hidalgo was forced to cancel plans to attend the Winter Youth Olympic Games in Lillehammer to promote the campaign of the French capital because she was warned she would have been in breach of rules.

Hidalgo had received a personal invitation from Lillehammer Mayor Espen Johnsen, but was forced to pull-out and cancel meetings that had already been arranged with voting IOC members.

The Budapest, Los Angeles, Paris and Rome bids were all "reminded" that they had broken bidding rules by inviting media to their national hospitality houses during Rio 2016.

insidethegames has contacted the IOC to ask if they are considering re-introducing bid presentations during the SportAccord Convention.