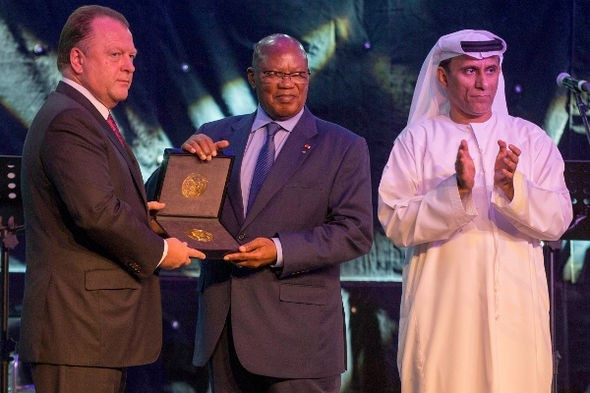 Association of National Olympic Committees of Africa (ANOCA) President Lassana Palenfo has been honoured by the International Judo Federation (IJF) for his contribution to the sport.

Palenfo, who stepped down as head of the African Judo Union (AJU) earlier this year after 16 years in the role, was given a special award by the IJF following the second day of competition at the Abu Dhabi Grand Slam.

A gala ceremony was held at the Ritz Carlton Hotel to recognise the career of Palenfo, who is beginning to retire from his various sporting roles at the age of 75.

The Ivorian was made an honorary member of the IJF by the sport’s worldwide governing body at the event.

"Ladies and gentlemen, dear friends, we are not here to say goodbye but to recognise Mr. Lassana Palenfo who has dedicated his life to judo," IJF President Marius Vizer.

"It is a pleasure to make him an IJF Honorary Member and, with his own family, to remain in our unique judo family.

"I thank your Mr Palenfo for your support and all of your work for to the development of judo worldwide.

"I wish all the best to Mr Habib Sissoko who was formally elected as the new African Judo Union President at the Rio 2016 Olympics.

"I wish you every success and to all of your team and African judoka."

Palenfo thanked those attending for the warm reception he received and said he has left African judo in good hands.

"Moving on is a part of life and I would like to express my gratitude and appreciation to everyone who has supported me and the progression of our sport,” he said during the ceremony.

"I have enjoyed working with you all and I have had incredible experiences through our sport which will always remain with me.

"I am sure that I am leaving the torch in good hands and the framework is in place for a prosperous future for African judo and the international stage.

"African judo has potential at all different levels and needs to be trusted, supported and better results will come.

"I leave with feelings of emotion but also a sense of competition."